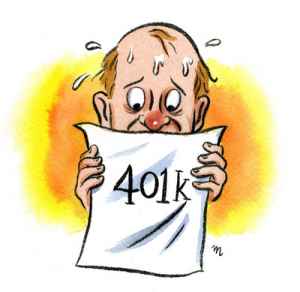 Employer 401(k) contributions that were reduced or eliminated this year may reappear in 2010. About 35 percent of companies that suspended their 401(k) match plan to resume employer contributions in the next six months, up from just 5 percent that said they planned to do so in June, according to a recent survey of large employers by consulting firm Watson Wyatt's director of defined contribution consulting. "They believe they have enough cash now. Also, many of them believe the economy is improving."

At least 301 companies trimmed their retirement contributions for employees this year, according to the Pension Rights Center. Employers in the hard-hit manufacturing and retail industries were the most likely to suspend matches, an analysis of Charles Schwab's 1.5 million 401(k) plans found, while almost no healthcare or wholesale companies dropped their contributions to retirement accounts. Overall, 9 percent of Schwab-administered 401(k) plans stopped matching 401(k) contributions as of July 31.

Several large companies, including American Express, Motorola, JPMorgan Chase, and Black and Decker, recently announced to employees plans to resume their 401(k) match. "A lot of employers did say that the suspension would be temporary," says Nancy Hwa, a spokesperson for the Pension Rights Center. "We do expect more companies to reinstate them next year, provided the economy is recovering the way it seems to be right now."

AARP says it will also reinstate 401(k) contributions for workers beginning in January. The organization, formerly called the American Association of Retired Persons, suspended the retirement benefit in March and has saved $7 million as a result. "It was gut wrenching," says Ellie Hollander, an AARP executive vice president, about the decision to eliminate retirement contributions. "Most employers that had to drop it did not want to have to suspend it. It's an important retention and recruitment tool to have." AARP says most employees continued to contribute to their 401(k)'s this year, even without the match. Workers also had access to a traditional pension, which was not altered during the financial downturn. AARP will resume fully matching the first 3 percent of pay saved for retirement and half of the next 2 percent of salary contributed to the 401(k).

Not every employer that resumes its match will contribute the same amount as before the suspension. While 70 percent of companies that expect to reinstate their 401(k) or 403(b) match plan to pick up where they left off, 13 percent of firms surveyed said they will reintroduce the match at a lower level, and 17 percent said the amount will depend on company profits, Starbucks will provide funds for their 401(k) in 2010. A 401(k) match that changes from year to year can make it difficult for individual employees to plan their retirement savings goals.

Companies are free to change or eliminate the match at any time. A number of large employers, including Hewitt Associates. That number jumps to $48,000 if the employee stops contributing to the 401(k) as well, assuming the worker receives a 3 percent raise each year and a 7 percent annual return on his investments. The most popular 401(k) match--50 cents for each dollar the employee contributes up to 6 percent of pay--costs the company an average of $1,500 per employee, Hewitt found.

Companies operating on a calendar year are expected to make internal announcements about their 2010 401(k) plans in the coming month. Says Hwa: "It certainly couldn't hurt for workers to remind employers that these matches are important."