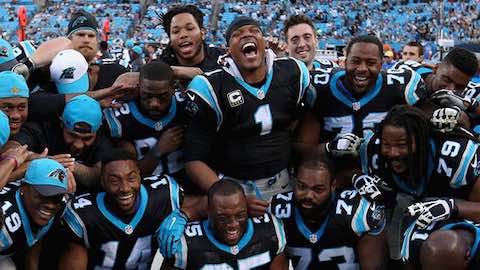 They piped in music for the stretching portion at the start of the Carolina Panthers practice on Friday, and when a particular hip-hop number titled Walked In, by an artist known as Bankroll Fresh, was played, it seemed to light a fuse.

Some players danced. Others bounced. Some hooted. And one even executed a perfect back-flip to complete what was clearly the most lively stretching session during the team's practices this week on the grass fields adjacent to Spartan Stadium at San Jose State University.

"There's usually one session during the week when they are over the top," Panthers coach Ron Rivera said. "The biggest key was that the last song was their 'dab' song."

The Panthers' spirited personality was on full display throughout the 90-minute, non-contact practice -- the last full practice before Super Bowl 50 — with the animated stretching session setting the tone.

On each of the past three days, the Panthers energy level during practices increased. Rivera said that's typical of how the team (17-1) worked during practice weeks all season.

"That's the one thing we've seen," Rivera said. "We've seen that build-up. That has been true every week, with the exception of one."

The three players on the injury report -- linebacker Thomas Davis, defensive end Jared Allen and running back Mike Tolbert -- were all full participants in practice and are all officially listed as probable.

Davis and Allen were expected to be medically cleared later on Friday.

"Based on what I saw," Rivera said, "I'm hard-pressed to believe that it's not going to happen."

Rivera was also upbeat about the overall sharpness of the practice. During the full-team drills pitting Cam Newton and the offense against the scout team, the football hit the ground just once -- on the final play.

Over three days of practices, Newton had just two incompletions -- the other being a deflected pass over the middle -- during team drills.

"That tells me they're focusing on what they need to do."

Newton even completed a pass to a target who won't line up on Sunday. Before the Panthers began a red zone segment, equipment assistant Greg Almond ran a route -- and Newton hit him with a perfect strike in the end zone.

Players cheered, and as Almond raced down the sideline he high-fived GM Dave Gettleman.

After players broke a circle after the end of practice, Newton quickly re-assembled the team for one more display of the Panthers' personality -- an impromptu team picture.

The official team picture will be taken during a walk-through session on Saturday at Levi's Stadium.

Friday's photo had a distinct Panthers flavor. Rather than saying cheese it was, "Dab on three!"