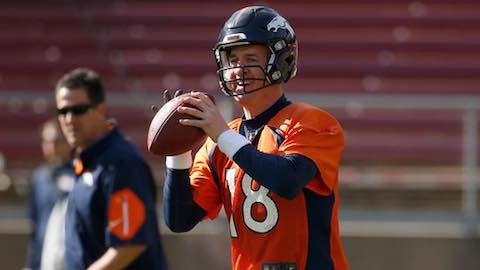 STANFORD, Calif. -- Preparing for what could be the final game of an illustrious career, Denver quarterback Peyton Manning was on fire Thursday in preparation for Super Bowl 50, completing three long throws in team drills with only one incompletion of a deep ball as the Broncos went through a spirited one-hour, 42-minute practice at Stanford Stadium.

"This is as good as he's looked all year long," Kubiak told a pool reporter on the field after practice. "You saw some big downfield throws today. This is what Peyton looked like back at the start of the season."

On a 58-degree afternoon with a light breeze under partly sunny skies on the Stanford University campus, Manning hit wide receiver Emmanuel Sanders on one deep ball early in the session. He followed later with a deep pass to wide receiver Demaryius Thomas and another to wideout Andre Caldwell. In all, Manning threw only four incompletions.

You don't want to make too much of a Super Bowl week practice, particularly when it's unpadded and no defender is diving around as he might in a game. But judging by Kubiak's reaction and tone, the Broncos couldn't be happier with their veteran quarterback, who missed six late-season games with injuries, before the biggest game of the season.

Denver also got good news on the injury front. Starting safeties T.J. Ward (ankle) and Darian Stewart (knee) participated fully in practice on the natural turf after being limited during Wednesday's workout. Guard Louis Vasquez, also limited with a knee injury on Wednesday, came back to practice without restriction. That means all 53 players were healthy and practicing fully today.

"We came out here with the thought that they'd all be limited again," Kubiak said. "But we got a response from them, so they just worked (normally)."

Kubiak said Thursday is normally the team's heaviest practice day, and he has his players in pads most Thursdays. But because they were in pads last Thursday, the team wore helmets and shorts.

"I thought we practiced very well today," Kubiak said. "We practiced better today than we did last week. I liked our retention. I liked our speed. I think we're in good shape here."

The team is scheduled to practice Friday at 11:30 a.m. Pacific Time at Stanford, the final full practice of the week. The Broncos will hold their final pregame work Saturday with an 11 a.m. walk-through practice at Levi's Stadium in nearby Santa Clara, site of Super Bowl 50.