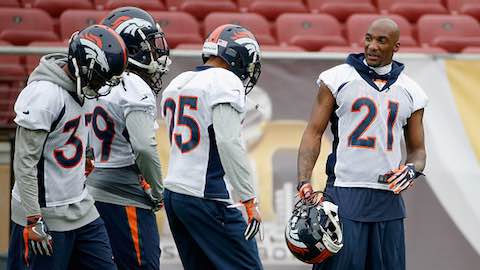 STANFORD, Calif. - On a perfect afternoon for football, the Denver Broncos began their final preparations for Super Bowl 50 Wednesday with their two rehabbing starting safeties, T.J. Ward (strong) and Darian Stewart (free), participating in limited roles but running freely on the natural grass inside Stanford Stadium.

Reflective of the times, security was very tight. When the Broncos arrived on campus in buses, they had a police escort on the ground and in the air -- with a police helicopter leading the caravan. With a temperature of 54, cloudy skies and a light breeze from the west, all 53 Broncos on the active roster went through the 1-hour, 35-minute practice at the stadium -- fittingly with Denver GM John Elway, the greatest quarterback in Stanford history and now the architect of this team, looking on from the sideline.

Ward, who re-injured an ankle in the fourth quarter of the AFC title game against New England, looked spry and only slightly favored his ankle. Stewart, who sprained a knee in the third quarter of the championship game, appeared to be running well and without restriction.

"They're listed as limited today," coach Gary Kubiak said after practice. "But I think they're right where they need to be, working toward gameday. They need to get their confidence as the week goes on. But they took the step they needed to take today."

One other Bronco, guard Louis Vasquez, was also limited with a knee injury. "But I would expect all three of them to play Sunday," Kubiak said. As per usual for a Wednesday practice, the team worked for about 15 minutes in walk-through fashion, 15 minutes on special teams, then with both the first-team offense and first-team defense working against the scout team. Music was played through big speakers to provide noise, but not overpoweringly so. The star of the day, without question: veteran cornerback Aqib Talib, who picked off three passes and took delight in running one of them back down the left sideline past the offense.

Other teams in past Super Bowl weeks have worked longer on Wednesday, but Kubiak said the Broncos did the majority of the prep work for the Super Bowl last week in Denver. "Our goal here is to be short and sharp," he said. "We had a really good start today, I thought. Our retention from last week was very good, and guys were very focused."

The CBS Super Bowl 50 TV crew watched from the sidelines.

The Broncos actually began their practice week Monday with a closed workout at Stanford. The team is scheduled to practice Thursday at 1 p.m. Pacific Time, then 11:30 a.m. PT on Friday, both at Stanford. They'll hold their final pre-game work Saturday with an 11 a.m. walk-through practice at Levi's Stadium, site of Sunday's Super Bowl.