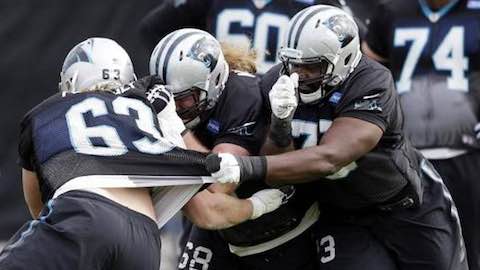 The familiar cadence at the line of scrimmage during the Carolina Panthers practice on Thursday came from backup quarterback Derek Anderson, charged up to do his best Peyton Manning impersonation as he ran the scout team offense against Ron Rivera's front-line defense.

At one point during the crisp, one-hour, 15-minute practice on the grass fields adjacent to Spartan Stadium at San Jose State University, Anderson screamed "Omaha" and drew the Panthers defense offside.

"We're trying," Panthers head coach Ron Rivera said. "We know that certain things (with calls at the line of scrimmage) mean something else. But it's just so our players hear it.

"We got one today. That was one of the things that got me today."

Rivera said that the would-be penalty was good as a teaching tool.

"But we're shooting for perfection," he added.

Rivera was pleased with the tempo of the practice, during which the three players listed on the injury report -- linebacker Thomas Davis, defensive end Jared Allen and fullback Mike Tolbert -- all had full participation.

It was apparent that the energy level increased a notch from Wednesday's session.

The tone was set by quarterback Cam Newton. After the team's stretching period before the start of the practice, Newton took off in a full sprint -- leading a pack of teammates -- to the other practice field where the offense would begin with individual drills.

Of the 80 plays during the team periods of the practice, Rivera said he counted four mistakes -- including the aforementioned offside penalty.

"There were some things as far as detail that we needed to clean up," Rivera said. "We had four mistakes. That will cost you. The game comes down to a matter of mistakes."

Still, when he addressed his team at the end of practice to provide his assessment of the work, Rivera said, "I told them that I thought it was exactly want we needed to do to go out and win a football game. I thought the tempo was what we needed."

Panthers owner Jerry Richardson attended his first practice of Super Bowl week, having arrived in California on Wednesday night. He watched from a golf cart, beyond a corner of the field.

Like Cowher, who won Super Bowl XL a decade ago as the Pittsburgh Steelers head coach, Simms can relate to the importance of the practice. Simms guided the New York Giants to a crown as the MVP of Super Bowl XXI.