Broncos Prepped and Ready to Go 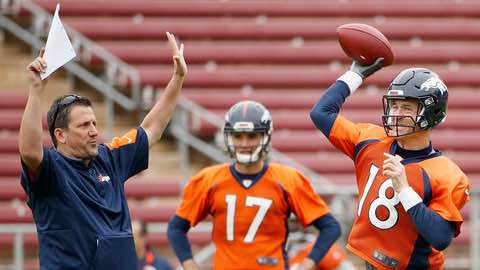 Broncos Prepped and Ready to Go

Only one of Manning's throws against Denver's scout team defense was incomplete on another perfect day for football -- 61 degrees, with a 5-mph breeze under bright sunny skies. It was the third straight day conditions on the grass Stanford Stadium field were ideal. Kubiak said he was very pleased with how his team came through the week in advance of Sunday's 3:30 p.m. Pacific Time start against the Carolina Panthers.

It's been a good week," Kubiak said, standing in the end zone after today's practice. "It's been a good two weeks, really. You see they're ready. They may be a little mentally tired -- just a little bit. They need to go rest for a couple of days and get ready to cut it loose Sunday."

The Broncos, as is their regular Friday practice custom, took the field at Stanford Stadium about 90 minutes earlier than the Wednesday and Thursday workouts here. They ran their full script of plays, a condensed version of what they do on Thursdays "just to show the coaches the players are on top of their stuff, and so they can finish the week strong and go rest up," Kubiak said.

Manning, who threw only four incompletions in a full practice Thursday, was strong today too. He hit Demaryius Thomas early on in the session on one bomb, serenaded by "O.P.P.," the Naughty By Nature song that was part of today's eclectic playlist. His backup, Brock Osweiler, also threw an impressive TD pass on a rope to wide receiver Cody Latimer.

For the third straight day, Denver was in top physical condition. After three players were limited on Wednesday, all 53 practiced fully for the second straight today -- including three iffy starters at the beginning of the week: safeties T.J. Ward (ankle) and Darian Stewart (knee), and guard Louis Vasquez (knee). All will start Sunday. That means all 53 players were healthy and practicing fully today.

"The preparation has been good all week," Kubiak said. "The only thing is if our safeties had been good to go for two weeks. But they're ready for the game, so that's what counts."

Kubiak praised the field conditions and work conditions at Stanford. "Unbelievable," he said. "The field is tremendous, perfect for practice, with great footing. We were able to stay in one place, feel very secure, and get all our work in under great conditions."

At the end of practice, as has become his Friday custom, Kubiak gathered the team and spoke to them for a minute, then had defensive backs coach Joe Woods talk. "That's become a good tradition," said Kubiak. "He's a good coach and always has a good message."

Now it's wind-down time for the Broncos, who are scheduled to hold their final pre-game workout Saturday with an 11 a.m. team photo and walk-through practice at Levi's Stadium in Santa Clara, site of Super Bowl 50.

Kubiak said the team will not switch hotels from the team hotel in Santa Clara to a more secluded one Saturday evening. That's logical, seeing that the nightlife Saturday will be centered in San Francisco, 41 miles from the Broncos' hotel.

"I've done it both ways -- staying at the hotel, and moving the night before," he said. "We're comfortable where we're at. We know where the meeting rooms are. We know where can hide. Plus, I like guys instead of just being in the rooms and staring at the mirror having the opportunity to see their moms and dads and families."