Evidence of Discrimination Against Black Coaches 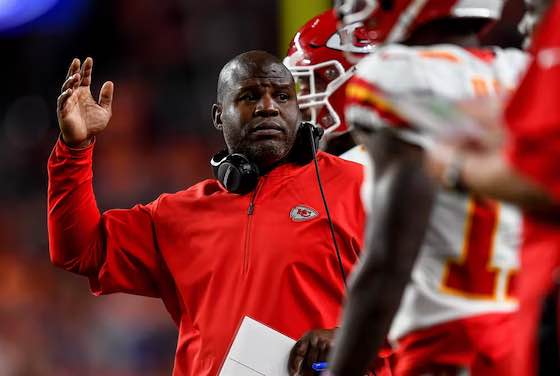 Eric Bieniemy, who has been the Kansas City Chiefs' offensive coordinator since 2018, has reportedly interviewed for 14 head-coaching jobs.

Boldly going where no NFL coach has gone before, recently fired Miami Dolphins head coach Brian Flores put his future career at stake and filed a class-action lawsuit against the league, the New York Giants, the Denver Broncos and the Dolphins, alleging discriminatory hiring practices among team owners.

Coincidentally, a study I began working on in the spring of 2020 was published online in the Review of Black Political Economy mere hours before Flores' lawsuit went public. My colleagues and I used data on all NFL offensive and defensive coordinators since the 2003 introduction of the Rooney Rule, which required all NFL teams to interview at least one minority candidate for vacant head-coaching jobs.

We wanted to determine what factors were correlated with a coordinator's probability of becoming a head coach. Our results identified many factors that have impacted a coordinator's chances of landing a head-coaching job. One of those factors was the coordinator's race.

The study pays specific attention to the case of Kansas City Chiefs offensive coordinator Eric Bieniemy, who is Black.

Before Flores' lawsuit was filed, Bieniemy had largely been the face of the discussion surrounding Black football coaches. What makes his case particularly interesting is the fact that two of his predecessors, who are both white, were quickly promoted to head-coaching gigs.

Many in the media have suggested that Bieniemy's lack of head-coaching opportunities can be attributed to racism. In our study, we wanted to see if there was any validity to this claim.

Pederson's replacement for the 2016 season was former Minnesota Vikings head coach Brad Childress. In 2017, Childress remained with the Chiefs as assistant head coach, and Matt Nagy, who is white, was promoted from quarterbacks coach to offensive coordinator. After only one season as Chiefs offensive coordinator, Nagy accepted a head-coaching offer from the Chicago Bears.

Using the simple rating system metric provided by Pro-Football-Reference.com, the Chiefs' worst offensive performance under Bieniemy's tutelage was better than any season for Pederson or Nagy. Yet Bieniemy, who was once again passed over in this year's hiring cycle, still awaits his first head-coaching opportunity despite reportedly interviewing for 15 such positions as of February 2022.

Our research revealed several potential reasons for why Bieniemy has yet to secure a job as a head coach in the NFL.

One could have to do with the position Bieniemy played and coached prior to becoming Chiefs offensive coordinator: running back. NFL owners seem to devalue experience playing or coaching this position in their head coaches. Of the 32 head coaches to begin the 2021 NFL season, none were former running backs. Excluding special-teams positions, running back was the only position not played by at least one head coach for the 2021 season.

At the same time, our research suggests that, even when you control for factors like previous playing and coaching experience, Bieniemy's race may have limited his head-coaching opportunities.

First, we found a statistically significant difference in how NFL playing experience impacts the probability of becoming a head coach for Black and non-Black coordinators.

Second, our research found that Black coordinators were simply less likely to be promoted to head coach between 2018 and 2020. However, there was no such evidence of this between 2003 and 2017.

Using our model, we calculate that Bieniemy's probability of promotion in 2020 would have increased from 42.5% to 57.2% if his race weren't Black. 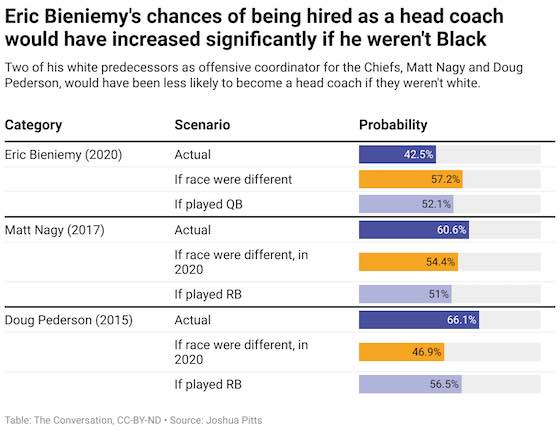 Race matters after controlling for other factors

A common reason given for Bieniemy's – and other Black coaches' – lack of head-coaching opportunities is a dearth of Black coaches who have experience playing or coaching the quarterback position. Black quarterbacks are becoming more common in the NFL, but for a long time, that wasn't the case. In a 2013 study, I found that Black high school quarterbacks were significantly more likely to change positions in college than white high school quarterbacks. It's likely that this segregation at the QB position has had a ripple effect that extends into the coaching ranks.

Others attribute the Chiefs' offensive success to Reid, who has a reputation as an offensive guru. Yet this is a belief that former offensive coordinators Pederson and Nagy would have also had to overcome to get their head-coaching gigs.

However, in our model, even after controlling for each of these factors, and more, we still find that Black coordinators have been less likely to be promoted since 2018. And while some have suggested that Bieniemy could simply be a poor interviewer, for that to explain our results, all Black coordinators would have to have suddenly become poor interviewers beginning in 2018.

In the case of Bieniemy, our findings suggest his race is not the only reason he has yet to secure a head-coaching job. But it's likely one of the reasons.

In the wake of Flores' lawsuit, the accused were quick to describe Flores' allegations as "disturbing," "blatantly false" and "malicious."

Our research is consistent with a different description of Flores' allegation of discrimination: true.