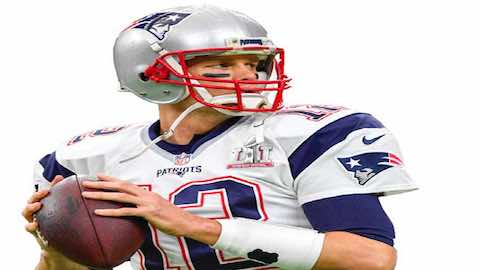 Tom Brady keeps on impressing. He is one of only two players to win five Super Bowls and the only player to win them all playing for one team.

"Tom is able to put it all together better than any player that I've ever coached. Putting all that together at once in just a couple of seconds of time, he has to process it once he gets the calls and gets to the line of scrimmage. I think his preparation allows him to, in part, do that. He has the football instincts as well. He's a great role model for all of us -- any player and any coach. All of us." -- Patriots head coach Bill Belichick

Most Total Wins By A Quarterback in NFL History

Most Playoff Wins By Starting Quarterback

In 2016, Tom Brady continued to leave his mark in the record books, becoming one of four quarterbacks in NFL history with at least 450 touchdown passes, joining Peyton Manning (539), Pro Football Hall of Famer Brett Favre (508) and Drew Brees (465). Additionally, he joined Manning, Favre, Brees and Pro Football Hall of Famer Dan Marino as the only quarterbacks with at least 60,000 career passing yards.

On the way to his fifth Super Bowl title as a starting quarterback -- the most all-time -- Brady threw 28 touchdown passes with two interceptions in 2016, the best single-season touchdown/ interception ratio in NFL history.