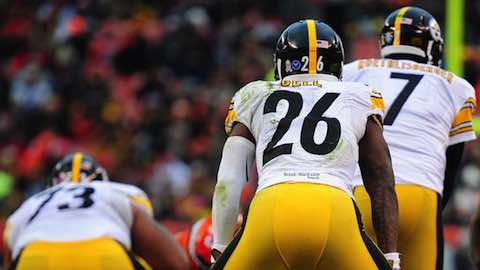 A tough, reliable running game allows an offense to command a game's pace. In the majority of contests, it can also control the game's result.

Pittsburgh running back Le'veon Bell ranked fifth in the NFL with 1,268 rushing yards last season, despite playing only 12 games. The Steelers were 6-0 in games in which Bell rushed for at least 100 yards.

"Le'Veon's one of the greatest players on our team," says Steelers quarterback Ben Roethlisberger. "He's one of the best running backs in the world. It's an honor to play with him."

The winning percentage of teams with a 100-yard rusher, 100-yard receiver or 300-yard passer over the past five seasons: