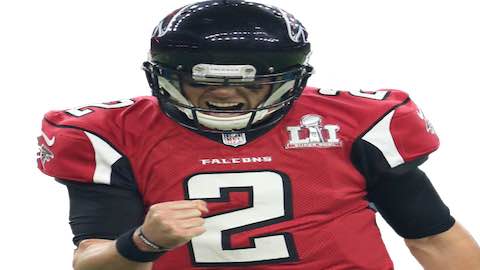 Regular season MVP Matt 'Matty Ice' Ryan led the Atlanta Falcons all the way to the Super Bowl last season. Can 'Matty Ice' lead the Falcons to a Super Bowl win after a devasting loss to the Patriots last year?

Atlanta Falcons quarterback Matt Ryan led the NFL with a 117.1 passer rating -- the fifth-best mark in NFL history -- and guided the Falcons to a berth in Super Bowl LI. Ryan, who set franchise passing records in yards (4,944), touchdowns (38) and passer rating (117.1), was named the league's Most Valuable Player and Offensive Player of the Year.

"I'm just proud of the way Matt bounced back. People doubted him. He won MVP and led us to the Super Bowl. To see him keep the confidence and stay positive, that's what I really admire about him. I'm all in with Matt." -- Falcons LB Vic Beasley, Jr.

"He's the MVP," says Falcons wide receiver JULIO JONES when asked how to describe Ryan. "He's a great player. He's a great leader on this team and he's my brother."

During the regular season, Ryan threw a touchdown pass to 13 different players, the most ever in a season in NFL history. "We had so many guys make great plays and have great seasons for us," says Ryan about the team's success last year.

Ryan's 4,944 passing yards ranked second in the NFL last season and marked his sixth consecutive 4,000-yard season. He is tied with Peyton Manning (1999-2004) and Matthew Stafford (2011-16) for the second-longest such streak in NFL history. Ryan and Stafford can both extend their streaks in 2017 and join DREW BREES (11) as the only players to accomplish the feat in at least seven consecutive seasons.

The Falcons topped the NFL with 540 points scored and, led by Ryan, became the first team ever to advance to the Super Bowl by scoring at least 30 points in each of the club's previous six games. Over the Falcons' final seven games, including Super Bowl LI, Ryan completed 159 of 218 passes (72.9 percent) for 2,145 yards with 20 touchdowns and no interceptions for a 134.4 passer rating. In Atlanta's three postseason games, Ryan posted a 135.3 passer rating with nine touchdowns and no interceptions.

Ryan's 3,288 career completions are the most ever by a quarterback in his first nine seasons, besting the previous mark held by Manning (3,131). Ryan and Manning are the only players in NFL history to complete at least 3,000 passes in their first nine seasons.

Ryan has passed for at least 200 yards in 55 consecutive games, the longest streak in NFL history. The last time Ryan failed to reach 200 passing yards in a game was Week 10, 2013 (November 10 vs. Seattle).

Most Consecutive Games With 200+ Passing Yards