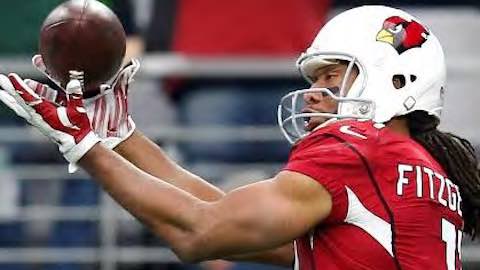 Entering his 14th NFL season, Arizona Cardinals wide receiver Larry Fitzgerald continues to be one of the NFL's most dominant. Last season, Fitzgerald led the NFL with 107 catches and was named to his 10th Pro Bowl, joining Pro Football Hall of Famer Jerry Rice (13) as the only wide receivers in NFL history to be named to the Pro Bowl at least 10 times.

"I think Larry is the greatest Cardinal ever." -- Cardinals president Michael Bidwill

At 33 years, 123 days old, Fitzgerald became the oldest player to lead the NFL in receptions since Jerry Rice (34 years, 71 days) in 1996. Fitzgerald owns the top three single-season reception totals in Cardinals franchise history and has four career 100-catch seasons, tied for the fourth-most in NFL history.

Most NFL Seasons With 100+ Catches

Last year marked the second time in his career that Fitzgerald led the league in receptions (103 catches in 2005). He is the first player in NFL history to lead the NFL in catches at least 10 years apart. Prior to Fitzgerald, the longest such span was six years by Rice (1990 and 1996).

Fitzgerald has 1,125 career receptions, the third-most in NFL history. He has 14,389 career receiving yards -- the ninth-most ever -- and needs 904 yards to move into third-place on the National Football League's all-time list. Fitzgerald's 104 career touchdown catches are the eight-most in NFL history and he is one of only six players to record at least 100 touchdown receptions with a single team.