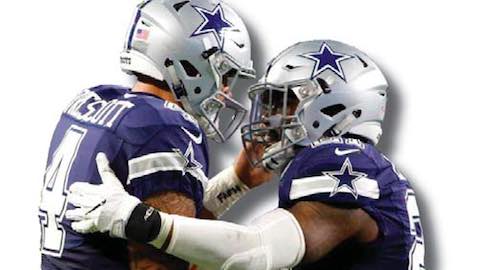 The Dallas Cowboys won an NFC-best 13 games last season and claimed the NFC East -- going from 'worst-to-first' in the division after a 4-12 record in 2015 -- led by two rookies: quarterback Dak Prescott and running back Ezekiel Elliott.

Both Prescott and Elliott were named to the Pro Bowl, marking the first time in franchise history two rookies were selected to the All Star game in the same season.

In Weeks 9-13 (November 6 to December 1), Prescott had a streak of five consecutive games with at least one touchdown pass and no interceptions, the only rookie in NFL history to accomplish the feat.

"Obviously, I couldn't have done this without Zeke," said Prescott when he was named the NFL's Offensive Rookie of the Year. "The defense honed in on him which made my job easier. He deserves this award just as much as I do, from his yards, his catches, the way he handled things in the backfield. It was always together as a team. Without Zeke, I don't win this."

Elliott had five games with at least 130 rushing yards, tying Dickerson (1983) and MIKE ANDERSON (2000) for the most by a rookie in a single season.

In Weeks 3-6 (September 25 to October 16), Elliott had a streak of four consecutive games with at least 130 rushing yards and is the only rookie in NFL history to accomplish the feat.

Most Single-Season Scrimmage Yards By Rookie