Tom Brady & Peyton Manning: All They Do is Win 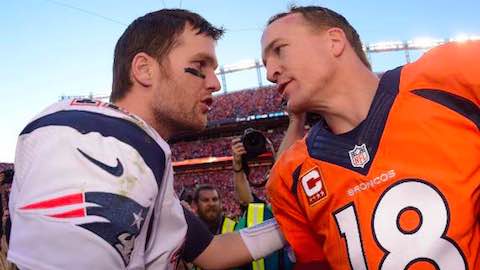 Tom Brady & Peyton Manning: All They Do is Win

Quarterbacks Tom Brady of the New England Patriots and Peyton Manning of the Denver Broncos are still at the top of their games. Brady and Manning, whose teams will meet in Week 12 for the 17th time of their storied careers, are the only quarterbacks in NFL history to be at least 100 regular-season games above the .500 mark.

Last season, Brady guided the Patriots to a division title for the 12th time in his career, the most of any starting quarterback in NFL history, en route to the franchise's fourth Super Bowl title. Manning led the Broncos to his 11th career division title, which ranks second only to Brady in NFL annals among starting QBs.

"I think the one thing that jumps out about Tom is just his consistency," says Manning about Brady. "I feel like he's been a better player each year than he was the year before, and that, to me speaks to his work ethic in the offseason, his refusal to be complacent or satisfied."

"Peyton is a great player, a great motivator and a great leader," says Brady about Manning. "He plays at a high level on a week-in, week-out basis."

Most Career Wins As Starter

Here's a look at the career regular-season and postseason totals of Brady and Manning and where they rank all-time:

NFL Football: "Tom Brady & Peyton Manning: All They Do is Win"