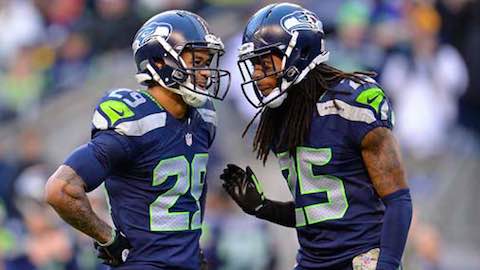 The Seattle Seahawks, who won Super Bowl XLVIII, have advanced to the Super Bowl in each of the past two seasons.

A big part of the team's success has been Seattle's defense, which has led the NFL in points allowed in each of the past three seasons.

"Defense wins championships," says Seahawks Pro Bowl safety KAM CHANCELLOR, one of the members of Seattle's vaunted "Legion of Boom" secondary. "We're working our hardest to get back to the Super Bowl. We're more focused and more driven than ever. We're hungry."

The Seahawks are one of only three teams in NFL history to lead the league in points allowed in three consecutive seasons. Seattle joined the 1953-57 Cleveland Browns and the 1969-71 Minnesota Vikings as the only teams to accomplish the feat.

"We recognize that what we're doing right now is pretty good," says Seattle Pro Bowl linebacker BOBBY WAGNER. "Our job is to keep that going. If we put a couple more championships up there, then people should consider us with the great defenses of all-time."

And that's the goal for the Seahawks, who will enter the 2015 season looking to shut down opposing offenses on their way to another Super Bowl appearance.