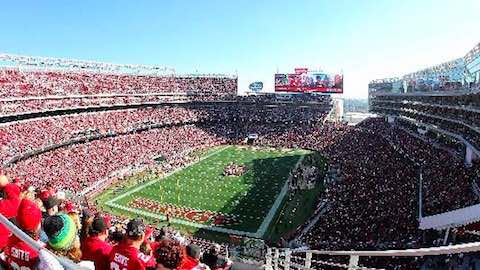 "It's a testament to everybody in the Bay Area," says 49ers CEO Jed York. "The city of Santa Clara came together, obviously San Francisco stepped up for the Super Bowl, San Jose has been a big part of this, and I think you're going to see everybody from Napa all the way to Monterey step up for this. Sports are supposed to bring people together; they bring communities together, and nothing emphasizes that more than the Bay Area hosting Super Bowl 50."

The first Super Bowl was played in California in 1967 at the Los Angeles Memorial Coliseum. The game will return to Northern California for the first time since Super Bowl XIX, which was held on January 20, 1985 at Stanford Stadium. Super Bowl XIX featured future Pro Football Hall of Fame quarterbacks Dan Marino and Joe Montana. Montana led the 49ers to victory, defeating Marino's Miami Dolphins 38-16.

To celebrate this golden moment, the NFL will break away from its traditional use of branding the Super Bowl with Roman numerals and will instead use the Arabic numeral "50." The league will return to Roman numerals for Super Bowl LI, scheduled to take place on February 5, 2017 at NRG Stadium in Houston, Texas.

Before the Super Bowl, fans can head over to Super Bowl City and the NFL Experience to partake in a week-long series of familyfriendly events. Super Bowl City is a free-to-the-public fan village, centered in Justin Herman Plaza, on the Embarcadero at the foot of San Francisco's famed Market Street. Fans will have the opportunity to sample locally grown food, experience the Bay Area's cultural diversity, view performances from national and local artists and participate in football-themed activities. In addition to serving as a hub of fan, sponsor, media and NFL activities, Super Bowl City will be the broadcast home for the CBS Television Network -- the exclusive broadcaster of Super Bowl 50 -- as well as NFL Network.

"Super Bowl City will give every San Franciscan a chance to share in the fan experience of Super Bowl 50," says San Francisco Mayor EDWIN M. LEE. "As San Francisco hosts the most philanthropic Super Bowl ever, our Bay Area region's small local businesses, hotels and restaurants will share in all these events. I'm excited that the San Francisco Bay Area and all we have to offer will be once again seen on one of the world's largest stages."

Moscone Center West will be home to the NFL Fan Viewing Gallery and the NFL Media Center. The Fan Viewing Gallery provides fans with the opportunity to get up close and personal as current players, NFL legends and celebrities are interviewed live by national radio personalities.

Both Super Bowl City and the NFL Experience will open on January 30, 2016, providing local residents the opportunity to experience the festival before out-of-town guests arrive. Additionally, 25 percent of every dollar raised by the San Francisco Bay Area Super Bowl 50 Host Committee will go toward supporting local community initiatives and high-performing nonprofits.