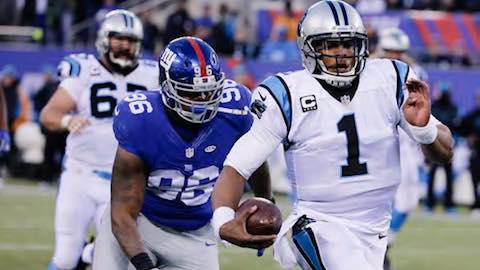 The 2015 NFL regular season really did have it all, including a fantastic finish.

Week 17 came right down to the wire as 11 of the 16 games scheduled for the final day of the regular season had playoff implications for at least one of the teams involved. Sunday's excitement was due in part to having 16 divisional games played on the season's final day, a tradition instituted in 2010.

The 2015 season featured a trend of many exciting games with close finishes, as nearly 55 percent were decided by one score -- 140 of 256 games were decided by eight or fewer points, the most of any season in NFL history.

Each of the 12 teams still in Super Bowl 50 contention can look back at the wild ride that was the 2015 regular season and appreciate how challenging the road to the playoffs was.

The CAROLINA PANTHERS (15-1) secured the No. 1 seed throughout the NFC playoffs and became just the seventh team in NFL history to win 15 games in a season.

"I'm an optimist, but even 15-1 is a lot," says Panthers head coach RON RIVERA about advancing to the postseason after the team posted the league's top regular-season record. "This is very satisfying but we still have a lot of work to do. I am proud of what this football team is becoming."

Since the 12-team playoff format was adopted in 1990, at least four teams have qualified for the playoffs in every season that were not in the postseason the year before. Four teams that missed the postseason in 2014 -- KANSAS CITY CHIEFS (11-5), MINNESOTA VIKINGS (10-5), HOUSTON TEXANS (9-7) and WASHINGTON REDSKINS (9-7) -- accomplished the feat this year.

"I feel very proud to be associated with this team," says Texans head coach BILL O'BRIEN, whose team clinched the AFC South division title with a win in Week 17. "Now the second season starts and that's exciting. It is also really exciting that we didn't back in to the playoffs. We won our way in and that is pretty cool."

The Chiefs won 10 consecutive games to finish the regular season and are the only team in NFL history with a 10-game winning streak and a five-game losing streak in the same season. Kansas City finished with an 11-5 record, the best in NFL history by a team that suffered five consecutive losses during a season.

"I love every one of these wins, our team loves every one of them and we cherish every one of the wins," says Chiefs head coach ANDY REID about the team's winning streak heading into the postseason. "Any time you can win in the National Football League, it is a major accomplishment. I'm just talking about one game, let alone all of them in the streak we had."

The 2015 season also proved that consistency is difficult, but not impossible, to maintain in the NFL. The NEW ENGLAND PATRIOTS won their seventh consecutive AFC East division title (2009-present), which ties the 1973-79 Rams for the most consecutive division championships in NFL history. The Patriots, who finished with a 12-4 record, became the second team in NFL history with at least 12 wins in six consecutive seasons.

The NFL is never short on surprises, and that leads to the excitement we witnessed in 2015:

Games continued to be this close, as more than half of all games were decided by one score.

Sixty-eight percent of games (174 of 256) were within one score in the fourth quarter. The 174 games are tied for the third-most of any season in NFL history.

Twenty-one games were decided in overtime this season, tied for the fourth-most in a season since overtime was instituted in 1974.

The most overtime games in a season since 1974:

Games continued to have a flare for the dramatic, as comebacks were a frequent theme.

In 2015, there were 67 comeback victories in which a team was trailing at some point in the fourth quarter, tied for the third-most in a single season in NFL history.

The most wins after trailing at some point in the fourth quarter:

Washington (9-7) clinched the NFC East division title, which marked the 12th time in the past 13 seasons that one or more teams went from last or tied for last place to a division championship the following year.

The teams to go from "worst-to-first" in their division since 2003:

Since realignment in 2002, Carolina (15-1) is the first NFC South team to win the division title in three consecutive seasons.

NFL QBs put together a historically proficient and prolific year in 2015.

The league-wide interception percentage of 2.38 percent was the lowest of any season in NFL history, surpassing the previous mark of 2.52 in 2014.

There were 59 individual performances with three touchdown passes without an interception in 2015, the most of any season in NFL history (58 in 2014).

There were 11 individual games with five or more TD passes this season, tied for the most in a single season in NFL history (2004).

DREW BREES and TOM BRADY both climbed higher on the all-time list for career passing yards and touchdowns. Brees ranks fourth in passing yards (60,903) while Brady is fifth (58,028). Brady and Brees each have 428 touchdown passes, tied for the third-most in NFL history.

Brees has passed for at least 30 touchdowns in eight consecutive seasons, extending his NFL-record streak.

Brees' 4,870 passing yards were the most in the NFL this season and he is the first player to lead the league in passing yards six times. Pro Football Hall of Famers SONNY JURGENSEN and DAN MARINO each accomplished the feat five times.

Pittsburgh quarterback BEN ROETHLISBERGER had 21 touchdown passes and has now thrown 10 or more touchdown passes in each of his first 12 seasons, tied with Pro Football Hall of Famer WARREN MOON for the third-longest streak to start a career in NFL history.

Jacksonville quarterback BLAKE BORTLES, who is 23 years old, had a single-season franchise record 35 touchdown passes and joined Pro Football Hall of Famer Dan Marino and MATTHEW STAFFORD as the only players in NFL history with at least 35 touchdown passes in a season at age 23 or younger.

Minnesota's ADRIAN PETERSON finished the season with an NFL-best 1,485 rushing yards and tied for the league lead with 11 rushing touchdowns. Peterson is just the third player in NFL history to lead the league in rushing yards after his 30th birthday.

With 11 rushing touchdowns in 2015, Peterson joined Pro Football Hall of Famer EMMITT SMITH (eight) and LA DAINIAN TOMLINSON (nine) as the only players in NFL history to rush for 10 touchdowns in at least eight different seasons.

St. Louis running back TODD GURLEY led all rookies with 1,106 rushing yards. Gurley had five games with at least 125 rushing yards, trailing only Pro Football Hall of Famer ERIC DICKERSON (seven in 1983) for the most ever by a rookie.

Pittsburgh wide receiver ANTONIO BROWN and Atlanta wide receiver JULIO JONES tied for the NFL lead with 136 receptions, the second-most in a single season in NFL history (MARVIN HARRISON, 143 in 2002).

Brown had four 185-yard receiving games in 2015, the most in a single season in NFL history.

Arizona wide receiver LARRY FITZGERALD (109 receptions) had more than 50 catches for the 12th consecutive season, the second-longest such streak to begin a career.

New York Giants wide receiver ODELL BECKHAM, JR. had 96 receptions for 1,450 yards and 13 touchdowns in 2015. Beckham, who had 1,305 receiving yards as a rookie last season, has 2,755 career receiving yards, surpassing RANDY MOSS for the most receiving yards through a player's first two seasons NFL history.

New York Jets wide receiver BRANDON MARSHALL had a franchise-record 109 catches this season and is the first player in NFL history with six 100-catch seasons.

Marshall and Jets teammate ERIC DECKER each had a touchdown catch in nine games in 2015, the most such games by teammates in the same season in NFL history.

Houston wide receiver DE ANDRE HOPKINS had a career-high 1,521 receiving yards this season. In three seasons, Hopkins has amassed 3,533 receiving yards, joining Randy Moss as the only players in NFL history to record 3,500 receiving yards before the age of 24.

Jacksonville wide receiver ALLEN ROBINSON (22 years, 132 days), who had 80 receptions for 1,400 yards and a franchise record 14 touchdown catches, became the youngest player in NFL history to register at least 1,400 receiving yards and 14 touchdowns in a single season.

Detroit's GOLDEN TATE (90 receptions), CALVIN JOHNSON (88) and THEO RIDDICK (80) became just the fifth trio on the same team to each record at least 80 catches in a season.

ANTONIO GATES (104) of the San Diego Chargers joined Tony Gonzalez (111) as the only tight ends with 100 career touchdown receptions.

Carolina quarterback CAM NEWTON had seven games with both a touchdown pass and a rushing score. Newton has 31 career performances with a passing touchdown and a rushing touchdown in the same game, tied with Pro Football Hall of Famer STEVE YOUNG for the most in NFL history. Newton reached the mark in his 78th career game while Young played 169 games in his NFL career.

Seattle quarterback RUSSELL WILSON passed for a franchise-record 4,024 yards and 34 touchdowns in 2015. He also added 553 rushing yards and is the first player in NFL history to record 4,000 passing yards, 30 touchdown passes and 500 rushing yards in a single season.

ADAM VINATIERI (2,253) of the Colts surpassed JASON HANSON (2,150) for third place on the all-time scoring list. With 107 points this season, Vinatieri became the only player in NFL history to score 100+ points in 18 different seasons.

New England kicker STEPHEN GOSTKOWSKI led the NFL in scoring for the fifth time in his career with 151 points, joining Pro Football Hall of Famer DON HUTSON (five) and GINO CAPPELLETTI (five) as the only players to lead the league in points scored at least five times.

Houston defensive end J.J. WATT, who led the league with 17.5 sacks in 2015, joined Pro Football Hall of Famer REGGIE WHITE as the only players with at least 15 sacks in three of their first five NFL seasons since the statistic became official in 1982.

Houston linebacker WHITNEY MERCILUS recorded 3.5 sacks in two different games in 2015 and joined Pro Football Hall of Famers MICHAEL STRAHAN (2001), Reggie White (1986) and CHRIS DOLEMAN (1998) and KARL MECKLENBURG (1985) as the only players to accomplish the feat since the statistic became official in 1982.

The Houston Texans (J.J. WATT, 17.5; WHITNEY MERCILUS, 12) and Cincinnati Bengals (CARLOS DUNLAP, 13.5; GENO ATKINS, 11) were the only teams with two players who each had double-digit sacks.