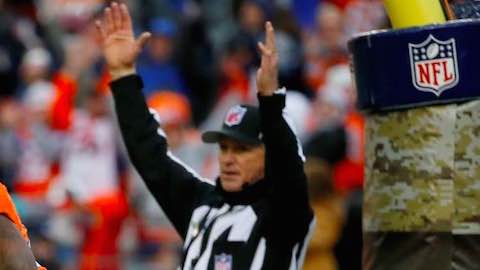 The 2015 rules changes and points of emphasis:

Defenseless player protections are expanded to the intended receiver of a pass following an interception or potential interception. A receiver who is clearly tracking the football and is in a defenseless posture will receive defenseless player protections. It will be a foul to hit this player forcibly in the head or neck area, or use the crown or hairline parts of the helmet. Violations result in a 15-yard penalty that will be enforced after the change of possession.

Rules prohibiting illegal "peel back" blocks extend to all offensive players. The rule previously only applied to players who were in the tackle box at the snap. When approaching your opponent from the side, you must get your near shoulder across the front of his body to legally block him below the waist. It is still legal to cut a defender, provided the blocker is moving toward his opponent's end line.

All chop blocks involving a back are eliminated to give defenders additional protection from low blocks. Any time a back is involved in a high/low block on a defender during a run, it is a foul for an illegal chop block. Prior to this change, on a running play, a player in the backfield could chop a defender who was engaged above the waist by another offensive player, if the contact occurred outside the normal position of the tight end. Any high/low block during a passing or kicking play has been and will continue to be illegal.

The prohibition against pushing teammates into the offensive formation is extended to punt plays. This rule previously applied only to field goals and extra point kick attempts.

The independent ATC (certified athletic trainers) spotters located in the press box are allowed to notify game officials to stop the game if a player exhibits obvious signs of disorientation or is clearly unstable, and it becomes apparent that the player will remain in the game. The game will be stopped immediately and the player will leave the game to be evaluated by the medical staff. This process will only take place if both the game officials and the medical staff fail to recognize the potential injury. Game officials have been directed to be diligent in this area and will stop the game when a player appears to be disoriented so he can get medical attention.

The extra point attempt will now be snapped from the 15-yard line. Two point-conversions will remain at the two-yard line. Additionally, the defense will be able to return a blocked kick, interception or fumble for two points.

There will also be points of emphasis on several existing rules this season (although the rules themselves have not changed):

All rules that encourage player safety will continue to be strictly enforced. The focus is on eliminating these tactics from the game. Players must avoid hitting or blocking opponents in the head or neck area, or using the crown or hairline parts of the helmet to make forcible contact anywhere on the body.

Sportsmanship is always a point of emphasis and last season the league saw a decrease of fouls in this area. The same emphasis will be applied to eliminating abusive, threatening or insulting language directed at opponents, teammates, coaches, officials or representatives of the league. This includes racial slurs, comments regarding sexual orientation or other verbal abuse. Coaches, officials and other league personnel will be held to the same high standard.

The increase in fighting is unacceptable and the league policy on fighting is clear and states the following: "Don't fight, and if a fight breaks out involving other players, stay away." Any active participant in a fight will be penalized. Flagrant conduct will result in ejections and any player that does not immediately leave the fight area will be subject to a fine.

Another area of concern involves players pulling opponents off a pile following a loose ball. There were several situations last season where these actions led to altercations. Pulling a player off a pile in an aggressive, forcible manner will result in a 15-yard penalty. This will allow game officials to determine possession and help reduce some of the safety risks involved with the action.

The language pertaining to a catch was clarified to provide a better understanding of the rule. In order to complete a catch, a receiver must clearly become a runner. He does that by gaining control of the ball, touching both feet down and then, after the second foot is down, having the ball long enough to clearly become a runner, which is defined as the ability to ward off or protect himself from impending contact. If, before becoming a runner, a receiver falls to the ground in an attempt to make a catch, he must maintain control of the ball after contacting the ground. If he loses control of the ball after contacting the ground and the ball touches the ground before he regains control, the pass is incomplete. Reaching the ball out before becoming a runner will not trump the requirement to hold onto the ball when you land. When you are attempting to complete a catch, you must put the ball away or protect the ball so it does not come loose.