NFL to Experiment with Eighth Official 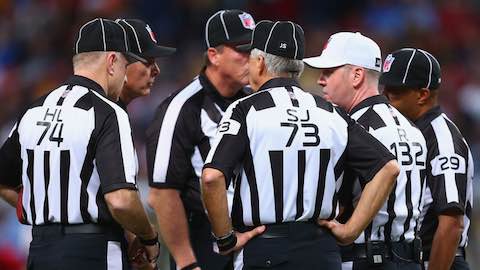 NFL to Experiment with Eighth Official

The NFL will experiment with eight officials on the field of play.

The league has utilized seven-person officiating crews since 1978 when the side judge was added to the crew.

During the preseason Week 2 experiment, the eighth official will help further the goal of trying to reduce the amount of times an official is responsible for multiple areas of the field that may not be in proximity to each other.

"We are going to look at positioning the eighth official in a couple of different areas," says NFL Vice President of Officiating DEAN BLANDINO. "We want to try to fill some of the holes that may happen in specific situations over the course of a game."

In certain games, the eighth official will take a position in the offensive backfield, joining the referee and the umpire. From this location, the "U2" will focus on the center pre-snap and the guard and tackle on the side of the formation closest to where he or she is positioned.

In other games, the eighth official will line up approximately 20 yards downfield from the line of scrimmage. From there, the "CJ" or "center judge" will focus on the center and two guards, with a particular emphasis on spotting defensive holding penalties. 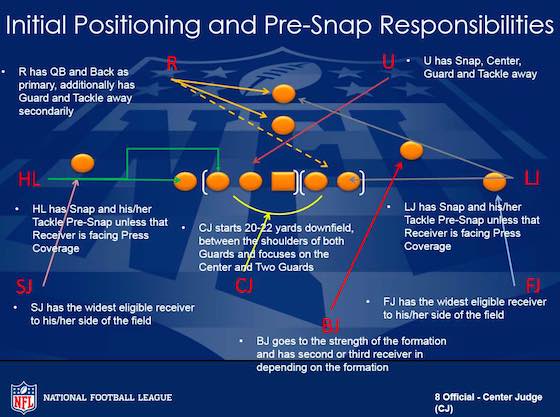 Umpires to Line Up in Offensive Backfield More Often

In its continuing efforts to protect players and officials from unnecessary risk and to better position officials to make the right call, the NFL is changing where the umpire lines up on certain plays during the 2015 season.

The umpire will now remain in the offensive backfield any time the offense snaps the ball inside the defense's five-yard line moving toward the end zone.

The new placement is designed to protect the official from unnecessary risk of injury, will have no effect on the hurry-up offense, and will put the umpire in a better position to make the right call on plays near the goal line. It also specifically addresses game action when the offense gets close to the goal line -- which effectively shrinks the field, giving the umpire less room to maneuver among the players and increasing the chances of the official being contacted.