NFL Stadiums On Game Day: An Experience Unlike Any Other 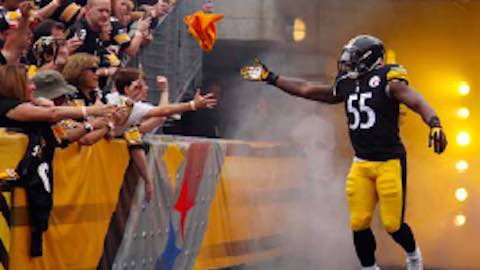 NFL Stadiums On Game Day: An Experience Unlike Any Other

The quiet anticipation as a deep pass spirals through the air &ellips the roar of the crowd &ellips and watching the replay on a larger-than-life video board.

As great as the in-home NFL viewing experience has become, there is nothing like being at an NFL stadium on game day. Delivering the best possible stadium experience to fans continues to be a league-wide priority.

"We are committed to improving the fan experience in every way we can, from the time fans arrive in the parking lot to when they depart the stadium," says NFL Commissioner ROGER GOODELL.

High-definition video boards have been installed at venues across the league in recent years, with stadium improvement projects totaling an investment of over $1 billion by teams. Game days also feature many other fan-friendly enhancements like interactive fan hospitality areas, improved entrances and more efficient concessions.

In 2015, NFL clubs will provide unique and memorable experiences for season ticket members and loyal fans on game day through their own rewards programs, or through a partnership with Experience, a technology company that helps fans at live events. Fans can redeem many game day benefits like seat upgrades, leading the team onto the field during player introductions and even watching a game from the owner's suite.

"There is no place better to watch an NFL game than at the stadium, with 70,000 other fans," says BRIAN LAFEMINA, NFL Senior Vice President of Club Business Development. "We are pleased to work with Experience to provide technology our teams can leverage as they continue to make the game day experience at their stadiums even better for their fans."

At Levi's Stadium -- the home of Super Bowl 50 -- the 49ers developed the Levi's Stadium Mobile App, the fan's one-stop-shop for all things on game day. The app gives fans access to game tickets and parking passes, allows them to order food and drinks right to their seats and features a "Game Center" for exclusive high-definition video replays.

Here are some of the other ways the NFL is working to enhance the in-stadium experience for fans:

NFL RED ZONE channel highlights are available on stadium video boards before and after Sunday afternoon games. NFL RedZone, which whips around every NFL game on Sunday afternoons to deliver the touchdowns and most exciting moments as they happen, launched in the cable television universe to critical acclaim in 2009 and was integrated into NFL in-stadium entertainment the following season.

Providing WIRELESS SERVICE to fans in NFL stadiums is a league priority with many stadiums recently completing installations or upgrades.

The NFL continues to embrace other new technologies, including RedZone on NFL Mobile with Verizon cell phones and the availability of in-game video devices such as YinzCam at many facilities.

The NFL is committed to providing a safe, secure and enjoyable atmosphere for fans at all stadiums. The league's FAN CODE OF CONDUCT, which was instituted in 2008, continues to help accomplish that goal, along with other successful programs at NFL venues that range from stadium security text messaging to responsible drinking campaigns and initiatives.

To provide a safer environment for the public and to significantly expedite fan entry, limits were put into in place for the 2013 season to the size and type of bags that fans may bring into stadiums.

The new postseason ticket policy will eliminate the need for fans to commit money early.

NFL Football: "NFL Stadiums On Game Day: An Experience Unlike Any Other"