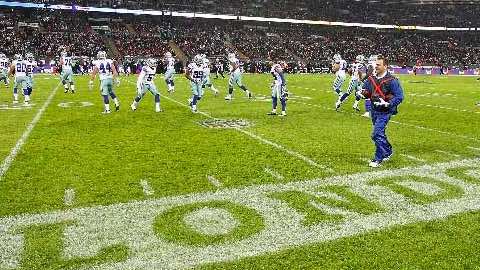 In response to outstanding and growing fan support of football in the United Kingdom, the NFL will once again play three regular season games in the United Kingdom. The 2015 slate features a first-ever division game in the UK as well as games played on consecutive Sundays, also a first for the NFL in London.

"London has done not only everything that we expected, but more than we expected," says NFL Commissioner ROGER GOODELL. "They're responding to the game better than we ever dreamed, with more enthusiasm and more passion."

The Buffalo Bills, Kansas City Chiefs and New York Jets will all play their first regular-season game in the UK this season -- which marks a total of 20 different teams to play in the International Series in London since it began in 2007.

Each game will be played at London's Wembley Stadium and kick off at 9:30 AM ET. 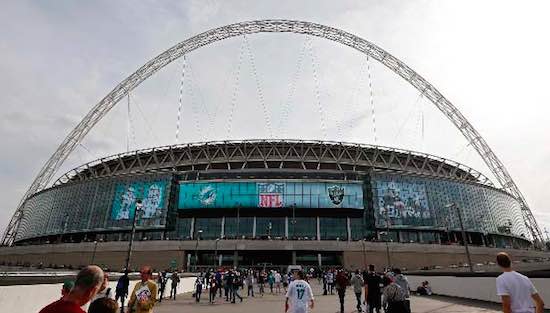 In the first of three 2015 London games, the Miami Dolphins will host the Jets, a long-time division rival, on October 4. Miami will play its third regular-season game in London and second as the home team. The Dolphins hosted the New York Giants in 2007 and defeated the Oakland Raiders 38-14 in 2014.

"We are excited to return to London this year," says Dolphins Owner STEPHEN ROSS. "Our organization has passionate fan support overseas and we embrace this opportunity to showcase our organization and grow the game globally."

"We are honored to represent New York, New Jersey and the National Football League in London, and for the opportunity to showcase this organization on a global stage," says Jets Chairman and CEO WOODY JOHNSON. "Playing in Wembley Stadium gives us the chance to welcome even more fans, all over the UK, to Jets Nation."

In the second 2015 London game, the Jacksonville Jaguars will host the Bills on October 25. This matchup will be shown worldwide on a digital platform. The NFL and Yahoo! Inc. have partnered to deliver the first-ever live stream of an NFL game to a global audience across devices for free. In keeping with the NFL's longstanding commitment to make its games available on free, over-the-air television, this game will also be televised live in both the Buffalo (WIVB-TV) and Jacksonville (WTEV-TV) markets.

"We are doing London because we want to have a compelling proposition for our corporate partners," says Jaguars Owner SHAD KHAN. "It's been very good for us, and also for the money that's come back to Jacksonville. I would like for us to continue to go.

It's been a great experience. It really prepares us for where we need to be in the future as a team."

"We are excited about the opportunity to play in London against the Jacksonville Jaguars," says Bills Owner TERRY PEGULA.

"Wembley Stadium is such a historical venue and we are proud to be a part of the league's long-standing tradition and commitment to playing NFL games in front of London's strong fan base. We feel it will be a great week for our organization and Bills fans everywhere, particularly those in the UK."

The 2015 International Series will conclude in Week 8 on November 1 when the Chiefs host the Detroit Lions.

The Chiefs will make their first trip to London and play in the franchise's first international game since a 1998 preseason contest against the Green Bay Packers in Tokyo, Japan.

"It is an honor for Kansas City to represent the NFL on an international stage," says Chiefs President MARK DONOVAN. "We are excited for the opportunity this creates for our fans, our city and the global growth of the Chiefs brand."

The Lions, who earned a thrilling 22-21 come-from-behind win against the Atlanta Falcons at Wembley Stadium in Week 8 of the 2014 season, will travel to London for the second consecutive year.

"We were actually approached by the NFL about the possibility of coming back two years in a row, which is the first time an away team has gone over in back-to-back years," says Lions President TOM LEWAND. "That's a testament to our fans and to our players and the kind of job they did not just on the field in Wembley but also throughout the week with the community. I think it speaks volumes about our team and about our fans."

The International Series began on October 28, 2007, when the Giants defeated the Dolphins 13-10 en route to a victory in Super Bowl XLII. Since its inception, participation in amateur football in the UK has risen by approximately 15 percent per year. The International Series to date has contributed to increased NFL fan interest in the UK, with a current fan base of 13 million, including more than three million avid fans, a 50 percent increase in the past three years.