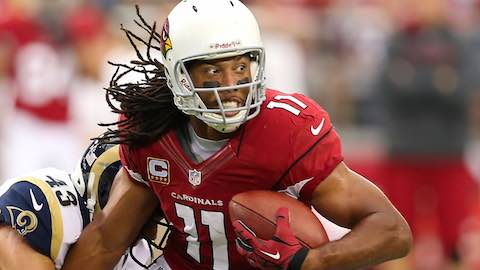 "When he's doing what he can do, that's tough for any defense," says fellow Broncos wide receiver EMMANUEL SANDERS. "We have a lot of guys who can make plays and we've got one of the greatest quarterbacks (PEYTON MANNING) of all time. So when Demaryius has it going, people can't cover him with one guy. And if they do, it's going to be a long day."

The NFL's most targeted receivers in 2014

In the past five seasons, Detroit Lions wide receiver CALVIN JOHNSON's 784 targets are the most in the league. Johnson also leads the NFL during that span with 7,334 receiving yards and is tied with Atlanta's RODDY WHITE for the most receptions with 450.

The most targeted receivers over the past five seasons (since 2010):

On his way to recording the second-most receptions in a single season in NFL history (129), Pittsburgh Steelers Pro Bowl wide receiver ANTONIO BROWN (left) led all receivers on third down with 28 first-down catches.

"The sky is the limit for him," says Pittsburgh quarterback BEN ROETHLISBERGER about Brown. "He has come along as a number-one guy in those crucial, game-changing situations."

The receivers with the most first-down receptions on third down in 2014:

Yards After The Catch

Detroit Lions wide receiver GOLDEN TATE led all wide receivers with 720 yards after the catch last season and ranked third in the NFC with 1,331 receiving yards.

Tate led Detroit in receptions (99) and receiving yards (1,331) in his first season with the team. Lions head coach JIM CALDWELL says Tate's quickness and ability to break tackles are things the club noticed.

"There's quickness," says Caldwell about Tate. "Obviously it's something that jumps out at you right away. He's quicker than the norm. He's a guy that can avoid tackles and he has a great awareness about him." Denver Broncos wide receiver DEMARYIUS THOMAS was among the league's best in racking up yards after the catch for the third consecutive season. Thomas ranked fourth last year with 680 yards after the catch. In 2013, he led the NFL with 718 yards after the catch after ranking third (561) in 2012.

"My thing is yards after the catch," says Thomas. "I can say it's one of my favorite things to do on the football field." Broncos quarterback PEYTON MANNING knows Thomas can pile up yards in a hurry.

"He can run by fast corners and he also catches the short pass and can turn on the jets," says Manning about Thomas. "He's an angry runner. When he has the ball in his hands, he's looking to score."

The players with the most yards after the catch in 2014: