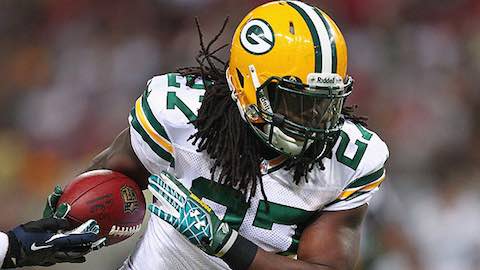 They seem to be all over the league. Guys like DeMarco Murray, Eddie Lacy, Jamaal Charles and others. Those running backs that can hurt you two ways: rushing… or catching… the ball.

Dual-threat NFL running backs not only force defenses to be ready for anything, but they allow offenses to keep their best playmakers on the field in any situation.

"If you get a running back that can catch the ball out of the backfield, it's very advantageous to your offense," says Chicago Bears running back MATT FORTÉ (left), who set the NFL single-season record for catches by a running back (102) in 2014. "You can hand him the ball and he's effective between the tackles and outside the ends. Also, he can protect the quarterback on passing downs, or split out as a receiver to catch the ball."

More and more offenses are relying on these dual-threat runners to keep the chains moving. Six running backs gained more than 1,000 rushing yards while registering at least 40 catches in 2014.

"He is really special. He's got enough speed to run around you, runs through tackles and runs inside very well. He's good on the perimeter and gets the ball in the passing game too. He's got extraordinary running ability and sense. He's a great running back." -- Seattle head coach Pete Carroll

"He's exceptional. To me, he's one of the best backs at his ability to change speeds. He can go from zero to 60 in a hurry. That's been his style, and it's one of the reasons that he's as good as he is. He can make you miss. He can run you over, but he's a true dual threat. He gets the ball on screens and even check-downs." -- Cleveland head coach Mike Pettine

"Forsett has really stepped up whether it's catching the ball out of the backfield or just being a home run hitter. He's really had a lot of plays over 20 yards. He's able to take advantage of the defense." -- Pittsburgh DE Cameron Heyward

"He's such a talented guy. He can do so many things for us. If he's not running, he can still show up in the pass game and get yards for us and get touchdowns. He's got great hands. He does some good things with the ball after he catches it." -- Green Bay QB Aaron Rodgers

"One of the best backs in the league. He's certainly been an impressive guy to watch, both in the passing game and in the running game. He breaks tackles, has good quickness, good balance, good vision, excellent hands, smart and aware in the passing game. He doesn't just catch the ball well, but he knows how to get open." -- New England head coach Bill Belichick

"He is a guy who does it all for us. You name it, he does it: run, catch, shortyardage, goal line, two-minute drill. We ask a lot of him, and he puts in a lot of time with his work ethic and takes it all on and does a great job with it." -- Kansas City QB Alex Smith