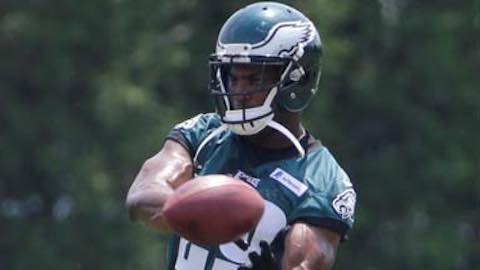 New Philadelphia Eagles running back De Marco Murray rushed for a league-best 1,845 rushing yards with the Dallas Cowboys last season. Murray, who was selected to the Pro Bowl and named the NFL Offensive Player of the Year, finished the season with 12 100-yard rushing games, the second-most 100-yard rushing games in a season in NFL history. Murray passed Pro Football Hall of Famer EMMITT SMITH (11 100-yard games and 1,773 rushing yards in 1995) in both categories to set single season franchise records.

Most 100-Yard Rushing Games In A Single Season

"DeMarco Murray is tough for any defense to stop," says Pro Football Hall of Famer and current NFL Network analyst MICHAEL IRVIN. "He isn't running around anybody. He is running through you. You have to put all of your guys on the line of scrimmage to stop him."

Murray also became the first player in NFL history to rush for at least 100 yards in each of his team's first eight games to start a season, surpassing Pro Football Hall of Famer JIM BROWN, who had six 100-yard rushing games to open the 1958 season.

Most Games With 100+ Rushing Yards To Start an NFL Season

When Murray suits up for Philadelphia in 2015, it will mark the first time since 1965 that the league's leading rusher started the next season on a new team. Buffalo running back Cookie Gilchrist led the AFL in rushing in 1964 (981 rushing yards) with the Bills and then finished 3rd (954 rushing yards) the next season with the Denver Broncos.

"I think Murray can have huge success in Philly," says Irvin. "The Eagles are going to line DeMarco up and hand him the ball. Defenses do not understand yet what just happened when you add him to that offense."