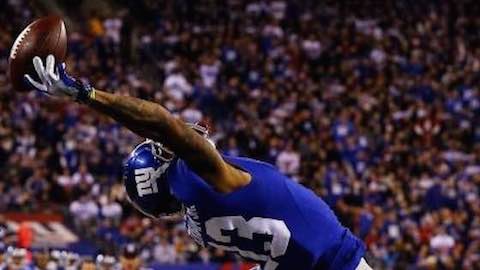 New York Giants wide receiver Odell Beckham, Jr. filled highlight reels with acrobatic catches in his debut season as he was selected to the Pro Bowl and named the league's Offensive Rookie of the Year.

"It really means everything," says Beckham about being honored as the NFL's best offensive rookie. "To see my mom and dad tearing up and the smiles on their faces and knowing I made them proud, it's something that can never be taken away from me."

After missing the first four games, Beckham amassed 91 catches for 1,305 yards and 12 touchdowns in 12 games. His 91 receptions and 1,305 receiving yards are the most by a player in his first 12 games to begin a career in NFL history.

"He's an outstanding young player with a bright career and future," says Giants head coach TOM COUGHLIN about Beckham. "As he's learning, you can only anticipate bigger and better things."

Starting in Week 9, Beckham recorded at least 90 receiving yards in nine consecutive games (active streak) and is tied with Pro Football Hall of Famer MICHAEL IRVIN (1995) for the longest such streak in NFL history. Beckham had four games with at least 10 catches, the most such performances by a rookie in league history.

"Odell makes lots of big plays for us," says Giants quarterback ELI MANNING. "Any time a young guy can come in and be a threat that other teams have to game plan for, it helps our team win. He has a big impact on the whole offense and us winning games."

Beckham was named the NFL Offensive Rookie of the Month in both November and December. "It means a lot," says Beckham about the honors. "I've been through a lot and put in a lot of hard work. I've gotten some opportunities to make some plays and I appreciate winning these awards."

Beckham followed up that month with a December to remember as he led the league in receptions (43), receiving yards (606) and touchdown catches (seven). His 606 receiving yards are the most by a rookie in any calendar month in NFL history and, combined with his 593 yards in November, Beckham became the only rookie ever to record at least 500 receiving yards in consecutive months.

In each of the final six weeks of the season, Beckham led all players in receiving yards which is the longest such streak by a rookie in NFL history.

After one of the greatest rookie seasons in NFL history, Beckham knows what his goal is for 2015.