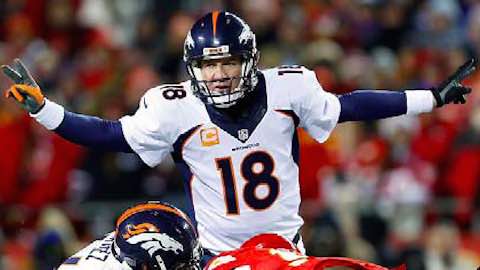 Denver Broncos quarterback Peyton Manning ranks among the league's elite and continues to etch his name in the NFL record book.

Following his prolific 2013 campaign in which he set single-season records for passing yards and touchdowns, Manning led Denver to a 12-4 record and an AFC West title in 2014, passing for 4,727 yards with 39 touchdowns. In Week 7 against San Francisco, Manning eclipsed BRETT FAVRE (508) for the most touchdown passes in NFL history.

"It's amazing what he's done -- but then again, it's not," says Favre. "I mean that with all due respect, because of his vigilance and determination. Peyton just has the drive to excellence that has made him special. I'm not surprised by anything he does."

Peyton Manning, who is entering his 18th season, is the NFL's all-time leader in career touchdown passes (530) and ranks second in career passing yards (69,691) and completions (5,927).

"He's very smart," says New England Patriots head coach BILL BELICHICK about Manning. "He has a great understanding of concepts and timing, game management, clock management, situational football -- third down, red zone -- great utilization of the field from sideline-to-sideline and attacking the deep part of the field, very accurate, great decision-maker, quick release. I don't think there are any weaknesses in his game."

Peyton Manning (14) also owns the record for the most 4,000-yard passing seasons in NFL history.

Manning's success has been attributed to his preparation, focus, dedication, durability and passion for the game of football.

Former Colts head coach and NBC Sports analyst TONY DUNGY spent seven years (2002-08) with Manning in Indianapolis and has been a witness to the five-time MVP's formula for success.

"He just goes way beyond what the normal person would," says Dungy. "He's chasing perfection."