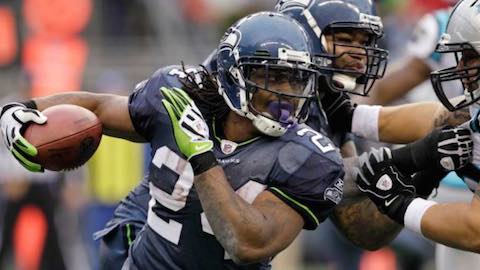 In the NFL, there are great players all over the field. And there are certain guys who are so mesmerizing to watch that fellow players can't help but admire some of their toughest competition.

So who did NFL players select as their favorite player to watch?

Pittsburgh Steelers Pro Bowl wide receiver Antonio Brown was chosen multiple times by players around the league who respect his ability to dominate, even when defenses focus on shutting him down each week.

"He brings a lot of energy," says Miami Dolphins running back LAMAR MILLER about Brown. "He makes plays, so whenever he touches the ball you know there's always excitement to see what he's going to be able to do. He's a very exciting player to watch."

Another popular choice is Seattle Seahawks All-Pro running back Marshawn Lynch, who has scored 11 or more rushing touchdowns in each of the past four seasons.

"As a running back and just watching his running style, I love the way that he plays the game," says Indianapolis Colts running back DAN "BOOM" HERRON about Lynch. "He's real physical and seems to be a guy that just loves to win and make big plays and I think he does that."

Here are some of the NFL players' favorite players to watch:

Jared Allen, Chi. "Aaron Rodgers, in my opinion, is the top quarterback we played last year. He is their offense. When you have a guy that can sit in the pocket and tear you apart when he gets in a rhythm, and you can't break his rhythm because he can tear you apart outside of the pocket, it makes for a long day at the office."

Michael Brockers, StL "Von Miller is such a great athlete and it is fun to watch him rush the passer."

Antonio Brown, Pit. "My favorite player to watch is Andre Johnson just because of his passion and his work ethic for the game and for how long he has been doing it. I love his excitement and the passion he brings to the game. He's definitely a marquee player that I enjoy watching."

Dez Bryant, Dal. "Calvin Johnson sets the standard. He sets that bar high for every wide receiver in the league. It's really respect to him that he makes receivers like us go out there and try to be our best."

Derek Carr, Oak. "Derrick Coleman because it's amazing what he has accomplished in the NFL dealing with profound hearing loss."

Lavonte David, TB "Antonio Brown. He plays with a lot of heart and he makes great plays on the field."

Dan "Boom" Herron, Ind. "Marshawn Lynch. As a running back and just watching his running style, I love the way that he plays the game. He's real physical and seems to be a guy that just loves to win and make big plays and I think he does that."

T.Y. Hilton, Ind. "Antonio Brown. We grew up together and I like watching him play. He's similar to me."

Fred Jackson, Buf. "Marshawn Lynch. I like the way he runs. He's aggressive and attacks defenses. As a running back, I think that's what we need to be good at."

Chandler Jones, NE "J.J. Watt. He shows up every Sunday and nobody can block him."

Lamar Miller, Mia. "I would say Antonio Brown. He brings a lot of energy. He makes plays so whenever he touches the ball you know there's always excitement to see what he's going to be able to do. He's a very exciting player to watch."

C.J. Mosley, Bal. "I'll go with one of my former teammates from Alabama -- Ha Ha Clinton-Dix, safety for the Packers. Playing with him at Alabama, I always knew the kind of potential he had, and to see him grow as a player like he did last year -- especially in the playoffs -- I really felt great for him. I always love watching my former teammates play, but I especially try to stay in touch with Ha Ha."

Torrey Smith, SF "A tie between Aaron Rodgers, Tom Brady and Peyton Manning, because of their timing and the impressive throws they're able to make."

Tyron Smith, Dal. "Jason Peters, because he is a technician. I watch a lot of film on him to get myself better."

Justin Tucker, Bal. "Peyton Manning, because he runs that offense like a military general."

Alterraun Verner, TB "Earl Thomas, because he plays with so much energy and passion for the game."