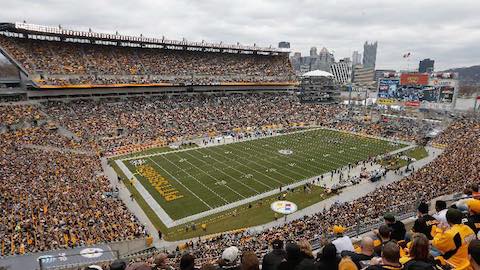 It's great to have home-field advantage, but road trips have their perks, too. Traveling to stadiums that pride themselves on unique weather conditions, loyal fans and rich traditions can present excellent opportunities for the visiting team to rise to the challenge. Plus, for some players, it means heading back to your hometown or bringing back Super Bowl-winning memories.

Here's a list of some players' favorite road stadiums:

"Heinz Field in Pittsburgh because they play 'Renegade' by Styx in the fourth quarter. They play it at key points in the game and the whole stadium goes nuts and they have this really good speaker system. Everyone's waving their towels and it's kind of a cool moment. It gives me more motivation and a little energy boost when you get out there. It's kind of an exciting moment."

"CenturyLink Field in Seattle because of the atmosphere."

"Jacksonville's EverBank Field because of the weather. Every time we play there it's really nice."

"That's easy. We play at Pittsburgh every year and Heinz Field has a great atmosphere. I like going to play there."

"CenturyLink Field in Seattle. It's a loud and hostile environment and a lot of fun to be a part of."

"My favorite road stadium to play in now would have to be Lambeau Field in Green Bay. Having played in it for years (as a Packer) when it was a home stadium, and now being able to go back, it's just a great venue knowing all the history, all the greats that have played there. There's a lot of history behind it and they take good care of their facilities, their grass, everything. The fans are awesome. It's just a great place to play."

"Pittsburgh's Heinz Field. Coming over from Baltimore, that rivalry is real. Even though I am with the Colts now, I still have that same feeling when I go in there. They hate us, I hate them. But at the end of the day, we respect each other and we play hard."

"Lambeau Field in Green Bay because of the history of the stadium."

"I like Carolina's Bank of America Stadium. We always play there in the preseason every other year. The grass is always great. It's not far from where I grew up either. I also played two bowl games there in college."

"Dallas' AT&T Stadium because that's where we won the Super Bowl (XLV)."