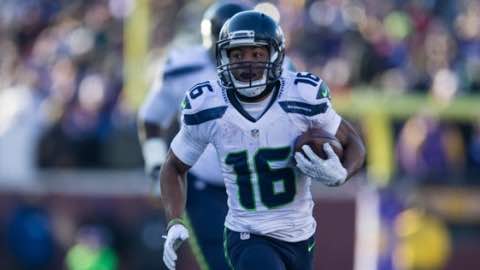 The ball sailed over Wilson's left shoulder and plopped 15 yards behind the line of scrimmage. Wilson gave chase and slid to his knees to scoop it up. Instead of pouncing on the ball, Wilson quickly got up and rolled right, six Vikings defenders in pursuit, including CB Captain Munnerlyn, who nearly sacked him. Wilson completed a pass to rookie WR Tyler Lockett, alone in the middle of the field.

"Unbelievable," said Baldwin. "When something bad looks like it is about to happen, Wilson works his magic and gets the ball to Tyler."

Lockett blazed inside the Minnesota five-yard line, setting up a three-yard TD pass to Baldwin that put the Seahawks back in the game. They won improbably when Blair Walsh hooked a 27-yard field goal attempt wide left toward the Mississippi River with 22 ticks to play.

No way would he miss from 27. Four years ago, as a rookie, he set an NFL record by going 10-for-10 from 50 or more yards. So the numbers were too stacked against a miss.

When Walsh missed, CB Richard Sherman fell to his knees and buried his face in the turf. DE Michael Bennett made the sign of the cross, muttered a prayer, and pointed an index finger toward he heavens. FS Earl Thomas jumped up and down like a Powerball winner.

None knew they had advanced to the divisional round by virtue of the shortest missed field goal in the final two minutes of any playoff game in NFL history.

The Seahawks stood history on its head in two other ways. They became the fifth team to win a postseason game by scoring 10 or fewer points under the current playoff format (since 1990), and the first since the 1997 Steelers, who knocked off the Patriots 7-6 in the divisional round.

The Seahawks entered the fourth trailing 9-0. By winning 10-9, they became the first team in history to win a road playoff game in which they where shut out in the first three quarters.

Before Sunday, 40 road playoff teams were scoreless in the first three quarters. They all lost.

We'll expand the parameters to include all regular-season games since 1990. Only 11 teams went on the road and won in regulation without scoring in the opening three periods. Those teams, listed chronologically:

Note that the Seahawks also won Sept. 19, 1999, when they rallied from a 13-0 fourth-quarter deficit and defeated the Chicago Bears 14-13 at Soldier Field. Seattle's quarterback that day: Glenn Foley, who threw TDs of 34 and 49 yards to Derrick Mayes and Fabien Bownes, respectively.

In their 40 seasons, the Seahawks have played 656 games, regular season and playoffs. In only one other contest did the Seahawks win -- home or away -- when they failed to score in the first three quarters. That game was Nov. 27, 1994 in the Kingdome, when Rick Mirer rallied Seattle from a 6-0 fourth-quarter deficit to a 10-9 victory over Joe Montana and the Kansas City Chiefs.

No wonder Sherman knelt, Bennett prayed and Thomas jumped for joy. They were part of a win unique in NFL playoff history.

Since he became Seattle's head coach in 2010, Pete Carroll has coached the Seahawks in 11 playoff games. Sunday's win was his eighth, and in five of those -- four with Wilson at quarterback — the Seahawks had to overcome a deficit of at least eight points.

Carroll's five comeback wins from a deficit of eight or more points is the most by any head coach in league history, breaking a tie with New England's Bill Belichick, who has won four playoff games after the Patriots trailed by eight or more. Carroll’s rallies:

You probably don't need a reminder that Belichick's fourth such victory came against the Seahawks in the Super Bowl. Seattle led by 10 before losing 28-24.

Wilson's four, fourth-quarter comeback wins are the most in the NFL playoffs since he entered the league in 2012. Tom Brady and Colin Kaepernick each have two.

Finally, the would-be tackler that Wilson dodged to avoid a sack on the 35-yard completion to Lockett was the aforementioned Captain Munnerlyn — the only one to record a pick six against Wilson (Oct. 7, 2012, for Carolina).

The Seattle Seahawks were held scoreless through three quarters, came back from being down 9-0 and ended up winning on a missed field goal by the Minnesota Vikings' Blair Walsh, beating the Vikings by a score of 10-9 in what was the third-coldest playoff game in NFL history with a temperature of negative-six degrees at kickoff.

In the frigid conditions, Seattle's offense could not finish drives, turning the ball over on downs twice near scoring territory and giving the Vikings good field position for starting drives on multiple occasions. Minnesota took advantage of field position, scoring field goals on drives of 25, 28 and 19 net yards gained. Walsh connected on field goals of 22, 43, and 47 yards, giving Minnesota a 9-0 lead by the end of the third quarter.

On the first drive of the fourth quarter, Seattle drove 80 yards and Russell Wilson connected with Doug Baldwin on a three-yard touchdown, bringing the score to 9-7, Vikings. On the ensuing Minnesota possession, Kam Chancellor forced an Adrian Peterson fumble, which Ahtyba Rubin recovered for Seattle at the Minnesota 40-yard line. Steven Hauschka made a 46-yard field goal to give Seattle the 10-9 lead with 8:04 remaining in the game.

On Minnesota's final drive of the game, Teddy Bridgewater started with the ball on the Vikings' 39-yard line and drove 52 yards setting up a 27-yard field goal attempt. Walsh's kick missed wide left with 0:22 remaining, returning the ball to the Seahawks and sealing the 10-9 Seattle victory. Adrian Peterson was held to 45 yards on 23 carries on the day.