Wild Card Weekend Preview: What to Look For 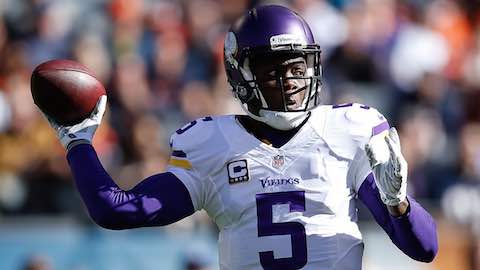 Wild Card Weekend Preview: What to Look For

The final 12 NFL playoff teams are now set. It doesn't matter how you got here. All that matters is that you're here.

The NFL playoffs, which conclude on February 7 with Super Bowl 50 at Levi's Stadium (CBS, 6:30 PM ET), begin this Saturday and Sunday with Wild Card Weekend. Here's what to look for during the Wild Card Weekend playoff games

Cincinnati's AJ MC CARRON and Denver's BROCK OSWEILER also contributed to their team's success this season and could make their playoff debut.

The quarterbacks with the most passing yards in their first career postseason start:

From Wild Card to Super Bowl

Winners in the Wild Card round have won the Super Bowl nine times. At least one Super Bowl participant in seven of the past 10 years played a Wild Card game.

The Wild Card round participants to win the Super Bowl:

The PITTSBURGH STEELERS and GREEN BAY PACKERS will each be playing on Wild Card Weekend. Pittsburgh will travel to Cincinnati this Saturday (8:15 PM ET, CBS) while Green Bay will travel to Washington on Sunday (4:40 PM ET, FOX).

The Steelers (33) and Packers (31) rank second and third, respectively, behind Dallas (34) for the most postseason wins in NFL history. The two teams have combined to win 10 Super Bowls (Pittsburgh six, Green Bay four).

The NFL teams with the most postseason wins in NFL history:

The NFL teams with the best postseason winning percentage in NFL history:

Kansas City quarterback ALEX SMITH has made three career postseason starts, completing 66 of 114 passes (57.9 percent) for 873 yards with nine touchdowns and no interceptions for a 108.6 passer rating.

The most consecutive pass attempts without an interception to start a career in postseason history:

Smith's nine postseason touchdowns without an interception are already the most consecutive TD passes without an INT in postseason history to start a career.

The most consecutive touchdown passes without an interception to start a career in postseason history:

Green Bay quarterback AARON RODGERS has thrown for at least 300 yards in four postseason games in his career.

The quarterbacks the most 300-yard passing performances in NFL postseason history:

Seattle running back MARSHAWN LYNCH has rushed for 100 yards in six postseason games, including his last two playoff games.

​With at least 100 yards on Sunday at Minnesota, Lynch would join Pro Football Hall of Famer EMMITT SMITH (seven) and TERRELL DAVIS (seven) as the only players in postseason history with seven 100-yard rushing games.

The players with the most 100-yard rushing games in the postseason:

[ Check Out: Behold Marshawn Lynch, "The Beast" Trods Upon The Mossy Land ]

With two sacks against Kansas City on Saturday, Watt would join Pro Football Hall of Famer RICHARD DENT (nine) and LA MARR WOODLEY (nine) as the only players to have seven or more sacks in their first five postseason appearances since the statistic became official in 1982.

The players with the most sacks in their first five postseason games (since 1982):

NFL Football: "Wild Card Weekend Preview: What to Look For"