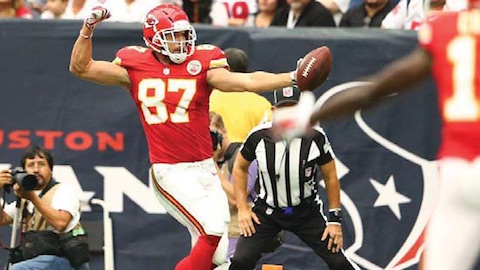 "We're in the dance and we've got to win," says Cincinnati defensive end WALLACE GILBERRY. "It's a new season and a new year. If we stay undefeated, it means we've done something special. We'll take it one day at a time, one game at a time and just get it done."

Week 17 came right down to the wire as 11 of the 16 games played on the final day of the regular season had playoff implications. Sunday's excitement was due in part to having 16 divisional games played on the season's final day, a tradition instituted in 2010. And three divisions were decided on the last day of the regular season, including the NFC North in game No. 256 of 256 as Minnesota defeated Green Bay.

"We are excited," says Pittsburgh head coach MIKE TOMLIN. "It's been a tough 16-game fight for us but we are where we want to be. We are where we need to be. We have an opportunity like the others in the field and for that, we're grateful."

The NFL playoffs, which conclude on February 7 with Super Bowl 50 at Levi's Stadium (CBS, 6:30 PM ET), begin this Saturday and Sunday with Wild Card Weekend.

"I'm proud of this football team," says Minnesota head coach MIKE ZIMMER. "We started out two years ago trying to build something special. It's not a surprise we are where we are at. These players have earned this opportunity and now we have to go out there and take it."

The Vikings are one of four new teams in this year's playoff field, joining Houston, Kansas City and Washington. Since the 12-team playoff format was adopted in 1990, at least four teams have qualified for the playoffs that were not in the postseason the year before. A look at the four games on Wild Card Weekend:

The Chiefs enter the postseason riding a 10-game winning streak. Kansas City is the first team in NFL history to win 11 games in a season in which it had a five-game losing streak.

"It's playoff time and there is no tomorrow," says Chiefs quarterback ALEX SMITH, who has nine touchdown passes and no interceptions in three career postseason games. "The mindset in the playoffs is to execute the offense and score points."

The Chiefs defeated the Texans 27-20 in Week 1 as Smith threw three touchdown passes, including two to Pro Bowl tight end TRAVIS KELCE, who finished with six catches for 106 yards.

Houston won the AFC South for the third time in franchise history (2011, 2012). The Texans have won seven of their past nine games, allowing just 12.7 points per game over that stretch and holding opponents to six points or fewer in five of those contests.

AFC North rivals Cincinnati and Pittsburgh will meet on Saturday night at Paul Brown Stadium. The clubs split the season series with each team winning on the road.

Pittsburgh clinched a playoff spot on the final day of the regular season and defeated Cleveland 28-12. Pro Bowl wide receiver ANTONIO BROWN finished the season with 136 catches for 1,834 yards and 10 touchdowns and is the only player in NFL history with at least 125 catches, 1,800 receiving yards and 10 receiving touchdowns in a single season.

"It's gratifying to be back in the playoffs," says Brown. "As a Pittsburgh Steeler, the expectation is to make the playoffs and hoist the Lombardi Trophy. For us to get the opportunity, it's a step in the right direction."

The Bengals tied a franchise-record with 12 wins and won the division for the fourth time under head coach MARVIN LEWIS.

"Every year we've improved and now we're 12-4," says 10-year veteran tackle ANDREW WHITWORTH, who was selected to his second Pro Bowl. "That's a heck of an accomplishment. It's something we're extremely proud of. We want to keep it rolling."

The Seahawks are back in the postseason and aiming to return to the Super Bowl for the third consecutive season. Pro Bowl quarterback RUSSELL WILSON led the NFL with a 110.1 passer rating and threw 24 touchdown passes with only one interception over the team's final seven games, the only player in NFL history with at least 24 touchdown passes and one or fewer interceptions over a seven-game span in a season. Wilson scored four touchdowns (three passing, one rushing) in Seattle's 38-7 win at Minnesota in Week 13.

"We know we've got a lot of football to play," says Seahawks wide receiver DOUG BALDWIN, who tied for the NFL lead with 14 receiving touchdowns. "We're on the path we're supposed to be on and that's what you want to see heading into the playoffs."

The Vikings have won three in a row, including a Week 17 victory at Green Bay (20-13) to clinch the NFC North division title. Pro Bowl running back ADRIAN PETERSON led the league with 1,485 rushing yards and joined Pro Football Hall of Famers MARION MOTLEY (1950) and CURTIS MARTIN (2004) as the only players 30+ years old to win the rushing title.

"It feels amazing to be the NFC North champions," says Peterson. "It puts us in a position now to make a run to the Super Bowl."

The Packers have won five of the past six meetings between the two teams. The last time the two clubs met (September 15, 2013), Green Bay quarterback AARON RODGERS passed for 480 yards and four touchdowns in Green Bay's 38-20 victory. Rodgers, who was selected to his fifth Pro Bowl, enters the 2015 playoffs with a 101.0 postseason passer rating, the third-best mark in NFL history.

The Redskins won the NFC East, the team's first division title since 2012. Washington quarterback KIRK COUSINS completed 192 of 257 passes at home for a 74.7 completion percentage, the highest in NFL history in home games in a season. Cousins set a franchise-record with 4,166 passing yards and is the only quarterback in team history to pass for at least 4,000 yards and 25 touchdowns (29) in a single season. He joined Pro Football Hall of Famer SONNY JURGENSEN (14 games in 1967) as the only players in franchise history to throw a touchdown pass in every game in a season.

"It's important to go into the playoffs with some momentum and a rhythm," says Cousins about the Redskins' current four-game winning streak. "To put together four wins in a row in the fourth quarter of the season is important. It's crucial to keep that momentum and carry it into what will be the biggest game of the year."