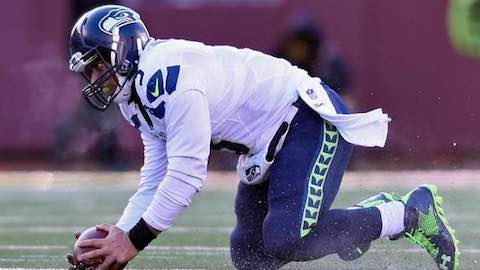 In the darkest moment of the coldest football game in Minnesota’s frosty history, Jeremy Lane was talking to Kam Chancellor on the Seahawks sideline. Down 9-0 in the fourth quarter with their Super Bowl aspirations being strangled as if by the cord connecting idiot mittens, the defenders knew what had to happen.

So Russell Wilson did — by having to go backward. Which was not only fitting, but by this game’s standards Sunday, mandatory.

Momentarily lost trying to change the play call, Wilson, on first-and-10 at the Minnesota 39, missed the shotgun snap from center. The ball rolled halfway to St. Paul. Earlier in the game, the Seahawks botched a snap so grievously that punter Jon Ryan ended up with a bloody nose and no first down.

So expectations were nil for this moment of randomness. Particularly by the time Wilson picked up the ball, because half the Vikings defense was upon him.

“I said, ‘uh-oh,’” Wilson said. “It seemed like a whole bunch of bears chasing you.”

Yet somehow, he eluded all the bears. Instead of lying under a game-defining sack that was purely his fault, Wilson glanced up to discover WR Tyler Lockett so alone he need an orphanage.

Wilson fired at the unmissable target. Lockett grabbed the ball, turned around and ran to the 5-yard line. For the crowd of 52,090 at TCF Stadium, which partied all afternoon as hard as possible under five layers of clothes, the game’s whipsaw of fortunes left them stupefied. The absurd play set up the game’s only touchdown.

Grace? Well, not really. Grace was when Vikings kicker Blair Walsh shanked a short, game-winning field goal with 22 seconds left to preserve the Seahawks’ preposterous 10-9 victory. That stunner seemed to have some cosmic intervention.

Grace may have been a part of the reason Chancellor was the subject of not one, but two heartfelt hugs in the locker room from coach Pete Carroll. After appearing to be a game-saving hero for his strip of the Vikings’ Adrian Peterson, whose fumble set up the Seahawks’ drive to the deciding field goal, Chancellor screwed up twice in a row, setting up potential disaster.

On the Vikings’ final possession, he was guilty of a pass-interference call that cost 19 yards, then missed a tackle that after a pass completion that turned into a 24-yard gain. For a guy whose foolish contract holdout was a big part of the Seahawks’ 0-2 start to the regular season, he was looking at being the goat for the season-ending loss.

“The penalty shouldn’t have been called,” Chancellor said. “But on the next pass, I went for the ball instead of the tackle. That was my mistake. Every time we go for the ball, we think we’re going to get it. Sometimes we don’t.”

In sorting out grace from grit Sunday, there was nothing lucky about about what Wilson did on his fateful play that will be embedded prominently in NFL playoff lore. Recovery from disaster is a fundamental part of Wilson’s command and leadership.

It’s why the Seahawks the past summer went to such effort and treasure to secure his services long-term, and why they remain on the path to a third consecutive Super Bowl appearance.

“That’s why they pay him the big bucks,” said LB Bruce Irvin. “He kept his composure. Any other quarterback would have thrown it away. He picked it up and made something happen with it.

“I wouldn’t want to have no other quarterback lead this team than Russell Wilson.”

The day was larded with headaches and distractions, starting with the team’s hotel running out of hot water. There was the shock of finding out what Minnesotans mean when they say “cold.” Then, early in the game, the coaches’ audio to Wilson malfunctioned.

“For some reason, I couldn’t hear the plays,” he said. “I could hear bits and pieces.”

He also had a hard time talking.

“The hardest part was communicating,” he said. “Your mouth kept freezing.”

And the semi-frozen football had a diminished flight. He completed 13 of 26 passes, under-throwing many.

“He had about five plays today that were just kind of off-the-charts,” coach Pete Carroll said. “It was a hard day for Russell.

“I don’t think (the game) was a measure of anything other than it was guts.”

The Seahawks move on in the playoffs to Carolina Sunday. Grace? Maybe. Mostly, Wilson took over, because he was cooler than the day was cold.

The Seattle Seahawks were held scoreless through three quarters, came back from being down 9-0 and ended up winning on a missed field goal by the Minnesota Vikings' Blair Walsh, beating the Vikings by a score of 10-9 in what was the third-coldest playoff game in NFL history with a temperature of negative-six degrees at kickoff.

In the frigid conditions, Seattle's offense could not finish drives, turning the ball over on downs twice near scoring territory and giving the Vikings good field position for starting drives on multiple occasions. Minnesota took advantage of field position, scoring field goals on drives of 25, 28 and 19 net yards gained. Walsh connected on field goals of 22, 43, and 47 yards, giving Minnesota a 9-0 lead by the end of the third quarter.

On the first drive of the fourth quarter, Seattle drove 80 yards and Russell Wilson connected with Doug Baldwin on a three-yard touchdown, bringing the score to 9-7, Vikings. On the ensuing Minnesota possession, Kam Chancellor forced an Adrian Peterson fumble, which Ahtyba Rubin recovered for Seattle at the Minnesota 40-yard line. Steven Hauschka made a 46-yard field goal to give Seattle the 10-9 lead with 8:04 remaining in the game.

On Minnesota's final drive of the game, Teddy Bridgewater started with the ball on the Vikings' 39-yard line and drove 52 yards setting up a 27-yard field goal attempt. Walsh's kick missed wide left with 0:22 remaining, returning the ball to the Seahawks and sealing the 10-9 Seattle victory. Adrian Peterson was held to 45 yards on 23 carries on the day.