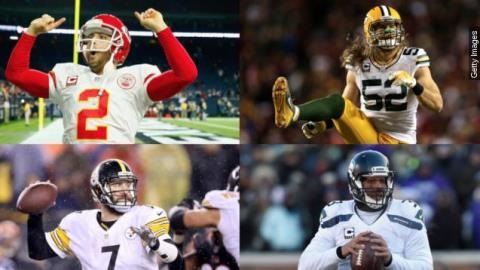 On Sunday, January 17, the Carolina Panthers (15-1), the NFC South champions and the conference's No. 1 seed, will welcome the Seattle Seahawks (11-6), the two-time defending NFC champions, to Bank of America Stadium (FOX, 1:05 PM ET) and the AFC West-champion Denver Broncos (12-4), who have home-field advantage throughout the AFC playoffs, will host the Pittsburgh Steelers (11-6) (CBS, 4:40 PM ET).

"In the postseason, every team is a good team," says New England head coach BILL BELICHICK. "You're not in the postseason if you're not a good team. These are the best teams in the league playing with everything at stake. There's nothing to hold back for. There is no game next week for the loser. This is competition at the highest level right here."

Three of the four games this weekend will be rematches from the regular season. A look at this weekend's Divisional Playoffs:

Kansas City and New England will meet in the postseason for the first time. The Patriots and Chiefs last played in 2014 (September 29) when Kansas City defeated New England 41-14 at Arrowhead Stadium. The last meeting between the two teams at Gillette Stadium was 2011 (November 21) which the Patriots won 34-3.

The Chiefs have won 11 consecutive games, including last week's 30-0 shutout victory at Houston in the Wild Card round. That win marked the third-largest shutout victory by a road team in NFL postseason history. Kansas City started the postseason off with a 106-yard kickoff-return touchdown by KNILE DAVIS, the second-longest kick-return touchdown in NFL playoff history.

"We wanted to come in and dominate," says Chiefs Pro Bowl safety ERIC BERRY. "Right now, we are locked in and ready for next week."

The Patriots, the defending Super Bowl champions, have won seven consecutive AFC East titles and earned a first-round bye for the sixth season in a row. At 12-4, New England became the fifth team in NFL history to post at least 15 consecutive winning seasons and the first to do so since San Francisco (1983-98, 16 seasons).

Quarterback TOM BRADY has 21 career postseason wins, the most in NFL history. Head coach BILL BELICHICK has 22 playoff victories and last year passed Pro Football Hall of Famer TOM LANDRY (20) for the most in league history.

"You've got to play your biggest at the biggest moments against the best teams in the toughest conditions," says Brady. "You've got to see what you're made of. That's what this tournament is all about."

The Packers and Cardinals will meet for the third time in the postseason. The clubs split the first two meetings as Green Bay defeated the St. Louis Cardinals 41-16 in the 1982 playoffs (January 8, 1983) and Arizona knocked off Green Bay 51-45 in overtime during the Wild Card round of the 2009 postseason (January 10, 2010). The Cardinals were victorious earlier this season in Week 16, beating the Packers 38-8 at University of Phoenix Stadium.

Green Bay advanced to the Divisional round after a 35-18 win over Washington last week. Packers quarterback AARON RODGERS, who has a 100.3 postseason passer rating in his career, threw touchdown passes to RANDALL COBB and DAVANTE ADAMS while running backs JAMES STARKS and EDDIE LACY each rushed for a score.

"The playoffs bring it out of all of us," says Rodgers. "It's a one-and-done mentality. We know how to win these games."

The Cardinals won a franchise-record 13 games and captured the team's first NFC West division title since 2009. Arizona has won at least 10 games in all three seasons under head coach BRUCE ARIANS.

The Cardinals' offense scored a team-record 489 points (30.6 per game) led by Pro Bowl quarterback CARSON PALMER and wide receiver LARRY FITZGERALD. Palmer set club records with 4,671 passing yards, 35 touchdown passes and a 104.6 passer rating. Fitzgerald, who holds NFL records for the most catches (30), receiving yards (546) and touchdown receptions (seven) in a single postseason (2008), had a team-record 109 catches and his seventh 1,000-yard season (1,215 yards).

"The regular season is over," says Palmer. "Now the fun begins."

Carolina and Seattle will meet in the postseason for the third time. The Seahawks have won both meetings, including last year's Divisional Playoff 31-17 in Seattle. The teams met earlier this season in Week 6 and the Panthers scored two late touchdowns to pull out a 27-23 come-from-behind victory.

The Seahawks improved to 6-1 in the postseason over the past three seasons under head coach PETE CARROLL with a 10-9 win at Minnesota last week. Seattle, which is the second team in NFL history to lead the league in fewest points allowed in four consecutive seasons (Cleveland, 1953-57), has won six consecutive road games and allowed just one offensive touchdown.

"We realize we've got to do this on the road and if we want to do something really special, it's going to take an incredible run here," says Carroll. "So we're just getting ready for Carolina and we're going to do everything we can to see if we can slow them down and find a way to move the football against a great football team. We're going to have to play great football."

The Steelers and Broncos will meet in the postseason for the eighth time (Denver leads the series, 4-3). Denver won the team's last playoff meeting during the 2011 postseason, a 29-23 overtime victory in the Wild Card round (January 8, 2012). The Steelers knocked off the Broncos in Week 15, scoring 24 unanswered points in the second half in a 34-27 comeback win.

Pittsburgh defeated Cincinnati 18-16 last week in the Wild Card round, the Steelers' 34th postseason victory, tied with Dallas for the most in NFL history.

"This is January football," says Pittsburgh head coach MIKE TOMLIN. "We're not a perfect group but we did enough to move on. We hope to say that again next week."

The Broncos clinched the AFC West and the No. 1 seed in the AFC playoffs with a 27-20 victory in Week 17 over San Diego. Quarterback PEYTON MANNING, who missed time with a foot injury, came off the bench to spark the Broncos and has been named the starter for the Divisional Playoffs.

"I just do what I think is best for our football team," says Denver head coach GARY KUBIAK about naming Manning the starter. "I feel really good about this and how far Peyton has come."

The Broncos, who led the NFL in total defense (283.1 yards per game) and passing defense (199.6 yards per game), had four players selected to the Pro Bowl and all four are on the defensive side of the ball: cornerback CHRIS HARRIS, JR. (second), linebacker VON MILLER (fourth), cornerback AQIB TALIB (third) and linebacker DE MARCUS WARE (ninth).