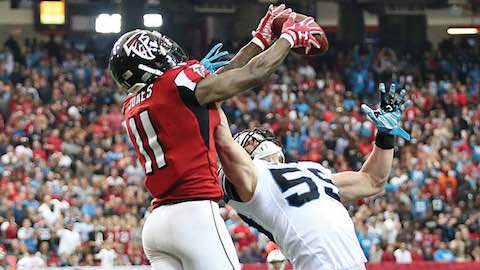 With 127 receiving yards on Sunday against New Orleans, Jones would surpass Pro Football Hall of Famer JERRY RICE (1,848 yards in 1995) for the second-most receiving yards in a season in NFL history.

The players with the most receiving yards in a season in NFL history:

With one week remaining in the 2015 regular season, at least three teams will advance to the playoffs after missing the postseason in 2014 -- KANSAS CITY (10-5), MINNESOTA (10-5) and WASHINGTON (8-7). Since the 12-team playoff format was adopted in 1990, at least four teams have qualified for the playoffs in every season that were not in the postseason the year before.

Two additional teams that missed the playoffs last season are still in contention for a trip to Super Bowl 50 -- HOUSTON (8-7) and the NEW YORK JETS (10-5).

The most combined points scored in a single season in NFL history:

Nine different quarterbacks have passed for 30 or more touchdowns in 2015, tied for the most in a single season in NFL history (2014).

With one touchdown pass on Sunday by Detroit quarterback MATTHEW STAFFORD (29) at Chicago or New York Jets quarterback RYAN FITZPATRICK (29) at Buffalo, this season would surpass 2014 for the most quarterbacks to throw at least 30 touchdown passes in a single season.

The quarterbacks to throw at least 30 touchdown passes this season:

With at least 400 passing yards on Sunday at Atlanta, Brees would tie PEYTON MANNING (14) for the most 400-yard passing performances in NFL history.

The quarterbacks with the most 400-yard passing games in NFL history:

With 109 rushing yards on Sunday against Tennessee, Indianapolis running back FRANK GORE would join Pro Football Hall of Famers EMMITT SMITH (11), CURTIS MARTIN (10), WALTER PAYTON (10) and BARRY SANDERS (10) as the only players in NFL history to rush for 1,000 yards in at least nine different seasons.

The players to rush for 1,000 yards in at least nine different seasons:

Below is a sampling of kicking milestones that can be reached Sunday.

With a 50-yard field goal on Sunday at Kansas City, Oakland kicker SEBASTIAN JANIKOWSKI, who has converted 52 career kicks of at least 50 yards, would surpass JASON HANSON (52) for the most 50-yard field goals in NFL history.

New England kicker STEPHEN GOSTKOWSKI, who currently leads the NFL in scoring (147 points) and has previously done so four times in his career, can join Pro Football Hall of Famer DON HUTSON (five) and GINO CAPPELLETTI (five) as the only players to lead the league in points scored at least five times.

Gostkowski is tied with Minnesota kicker BLAIR WALSH for the most field goals made this season with 32 and can join Pro Football Hall of Famer LOU GROZA (five), WARD CUFF (four) and JACK MANDERS (four) as the only players to lead the league in field goals at least four times.