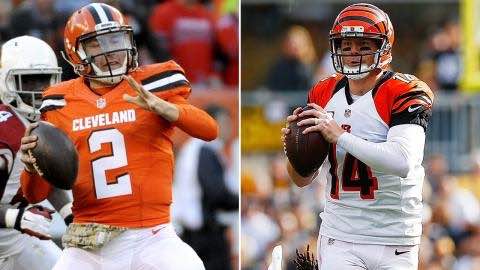 Cincinnati enters Week 9 after defeating Pittsburgh 16-10 on Sunday and improving to 7-0 for the first time in franchise history.

Bengals quarterback ANDY DALTON passed for 231 yards and connected with wide receiver A.J. GREEN on a go-ahead nine-yard touchdown pass in the fourth quarter to give Cincinnati a lead it would not relinquish. Dalton earned his 23rd career road victory, tying Pro Football Hall of Famer DAN MARINO, BEN ROETHLISBERGER and MATT RYAN for the most road wins by a starting quarterback in his first five seasons during the Super Bowl era (since 1966).

"Our defense kept getting stops, the offense had chances to get it in there and eventually score touchdowns, and we did," says Dalton. "We were able to do enough to get a touchdown at the end. The defense played great. This was a big team win. We have another divisional game this week against Cleveland. It is a short week and we need to prepare to get ready to go."

"We don't have a lot of time to feel sorry for ourselves," says Cleveland head coach MIKE PETTINE. "We have a quick turnaround and have to go on the road against an undefeated team in the division."

Clevelnd tight end GARY BARNIDGE had seven receptions for 53 yards and a touchdown against Arizona. Barnidge now has a career-high six touchdowns this season, tied with Pro Football Hall of Famer OZZIE NEWSOME (1981 and 1983) for the third-most receiving touchdowns by a Browns tight end in a season, trailing Newsome (nine in 1975) and JORDAN CAMERON (seven in 2013).

The Browns defense recorded a season-high four turnovers (three fumbles and one interception) against Arizona. Cornerback K' WAUN WILLIAMS had two forced fumbles and one fumble recovery, while linebacker ARMONTY BRYANT forced a fumble and recovered a fumble that he returned 34 yards to setup a Browns touchdown late in the first quarter. Veteran linebacker KARLOS DANSBY recorded seven tackles and forced his first fumble of the season.

"Getting turnovers is one of the things we preach," says Browns safety TASHAUN GIPSON. "The coaches challenge us to be one of those teams that is nasty. It doesn't necessarily have to be an interception all the time or a big hit, but be the guys who attack the ball by any means."

Gipson secured his second interception of the season last week against the Cardinals. Since 2013, his 13 interceptions are the most in the NFL.