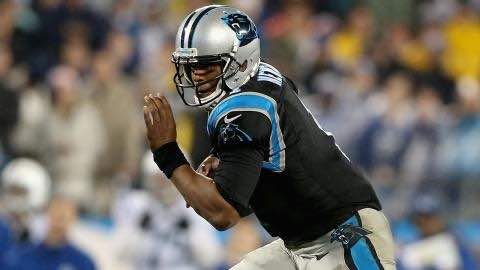 The first half of the season has been packed with thrilling comebacks and close finishes and the excitement will only intensify as the playoff push begins. Here's a preview of key week 9 matchups as the NFL season approaches the halfway mark

As the NFL season approaches the halfway mark, there are four undefeated teams -- Carolina (7-0), Cincinnati (7-0), Denver (7-0) and New England (7-0). That marks the most 7-0 teams in a season in NFL history and doubles the previous high of two, which occurred most recently in 2009.

The first half of the season has been packed with thrilling comebacks and close finishes, but the excitement will only intensify as the playoff push begins.

"The season is not over. It's just getting started," says Cincinnati safety REGGIE NELSON.

Several games in Week 8 were decided in the final moments, as six teams scored the winning points inside the 3:00 mark of the fourth quarter or in overtime. Sunday marked the first time there were three game-winning scores in the fourth quarter with no time remaining on the same day since the 1970 AFL-NFL merger.

As the season's midpoint approaches, it's all still to be decided, with plenty of football left to play. Since 2000, 35 teams have reached the halfway point of their season with a .500 or below winning percentage and advanced to the playoffs, including at least one in each season.

Of those 35 clubs, five have advanced to the Conference Championship Game, including the 2001 New England Patriots, who won Super Bowl XXXVI.

​Week 9 begins with a divisional game between the Bengals and Browns in Cincinnati on Thursday night (8:25 PM ET, NFLN) and concludes with a Monday Night Football match-up in San Diego as the Chargers host the Bears (8:30 PM ET, ESPN).

Some of the other key games this weekend:

The Week 9 schedule is highlighted by a battle of the top two teams in the NFC, as Green Bay travels to Carolina. The Panthers outlasted the Colts for a 29-26 overtime win on Monday night as Carolina reached 7-0 for the first time in franchise history.

"It wasn't pretty," says Panthers quarterback CAM NEWTON. "We know that. We know we have to be better, but at the end of the day we're one of the lucky few who can say we're 7-0."

The Packers will look to rebound from their first loss of the season, a 29-10 road defeat against the 7-0 Broncos. Week 9 marks the second consecutive game Green Bay will face an undefeated opponent.

"We have another tough road challenge in Carolina," says Green Bay quarterback AARON RODGERS. "These two games are going to show us how good we are after a 6-0 start."

Minnesota will host St. Louis on Sunday afternoon, as the Vikings aim for their seventh consecutive home win. Minnesota earned a 23-20 road victory in Chicago last week, as kicker BLAIR WALSH converted the game-winning 36-yard field goal as time expired. The Vikings have won five of their past six games, with their past two wins coming in games decided by one score.

"We are developing some intensity at the end of football games, being able to come back and finish," says Minnesota head coach MIKE ZIMMER. "The team is really starting to believe we can win in these situations."

St. Louis has won three of its past four games, including a decisive 27-6 home win against San Francisco last week. Running back TODD GURLEY led the team with 133 rushing yards with one touchdown against the 49ers and is the first rookie in NFL history to rush for at least 125 yards in four consecutive games.

"I keep bringing up that 'S' word, which is 'special,'" says St. Louis head coach JEFF FISHER of his star rookie. "I've been saying that he's special."

Oakland will travel to Pittsburgh for a battle of second-place teams. The Raiders have won back-to-back games and aim to reach the season's hallway point with a record above .500 for the first time since 2001, when Oakland started 6-2 en route to a 10-6 record and an AFC West title.

"I think we're getting better each week," says Oakland head coach JACK DEL RIO. "The process that we work so hard at, I feel like the coaches are doing a good job game planning, the players are doing a great job coming and being purposeful about our work, learning about each opponent and preparing to come out here and compete."

Pittsburgh welcomed quarterback BEN ROETHLISBERGER back to the lineup last week, as he became the first Steeler to reach 40,000 career passing yards. But the Steelers could not hold their fourth-quarter lead against the Bengals, as Cincinnati preserved its undefeated record with a 16-10 victory at Heinz Field.

"We needed one more stop," says Pittsburgh defensive end CAMERON HEYWARD. "We've got to grow from this. If we talk about being the team we want to be, you've got to step up in critical situations. We have to learn from this."

The Colts will host the undefeated Broncos on Sunday afternoon in a battle of division leaders. Denver earned a 29-10 win at home against Green Bay last week. Quarterback PEYTON MANNING passed for a season-high 340 yards and earned his 186th career regular-season win, tying BRETT FAVRE for the most of any starting quarterback in NFL history.

"Anytime that you have some sort of record like that, you think about all the players that you played with, the coaches that you've coached with," says Manning, who needs 284 yards this week to surpass Favre's all-time record for career passing yards (71,838). "I've played for a long time. This one might be a quarterback's record, but I look at all those as a number of people contributing to all those wins."

The Colts, who are tied for first place in the AFC South at 3-5, erased a 17-point fourth-quarter deficit against Carolina to force overtime before falling 29-26.

"We can still accomplish all of our goals," says Indianapolis head coach CHUCK PAGANO. "The number one goal is to win the division, win the next game. We have to get to number four. Everything is still out there for us."

Sunday's schedule wraps up in Dallas as the Cowboys host the division rival Philadelphia Eagles on Sunday Night Football.

With only two wins separating the four NFC East clubs in the standings as the halfway point approaches, the division title is still up for grabs.

The primetime game marks the return of running back DE MARCO MURRAY to Dallas for the first time since signing with Philadelphia in the offseason. Murray, who was named the 2014 NFL Offensive Player of the Year by the Associated Press, set Cowboys records for rushing yards (1,845) and scrimmage yards (2,261) last season. Fresh off an extended break, the Eagles have an NFC-best 20-6 (.769) record after bye weeks.

"We have a really good football team," says Philadelphia safety WALTER THURMOND. "Even though our record says otherwise, we know what we have in our room and it really comes down to needing to execute in all three phases. We can't beat ourselves. That's the biggest thing."

The Cowboys lost a 13-12 decision at home against the defending NFC champion Seahawks last week, but Dallas is hopeful about its prospects with quarterback MATT CASSEL in a starting role in relief of an injured TONY ROMO.

"Obviously we didn't make the plays in the passing game at the critical moments -- down in the red zone and some of the third downs -- as the game wore on," says Dallas head coach JASON GARRETT of his offense's performance in Cassel's second start. "But we'll look at the tape. I think Matt's getting more comfortable running our offense."