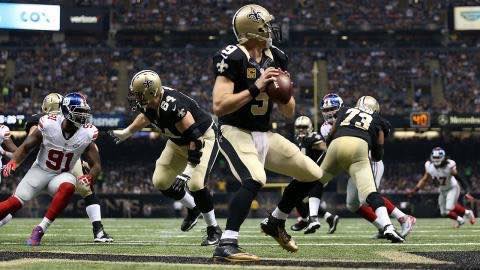 New Orleans quarterback DREW BREES completed 28 of 39 passes (71.8 pct.) for 387 yards and three touchdowns in the Saints' overtime loss to the Titans.

Brees, who threw for 505 yards and seven touchdowns against the New York Giants in Week 8, surpassed his own performance (349 yards in 2006) for the second-most passing yards following a 500-yard performance in NFL history.

The NFL quarterbacks who have passed for 500 yards in a single game and had the most passing yards the following week:

The quarterbacks who have passed for seven touchdowns in a single game and their next performance:

The Green Bay Packers and The Indianapolis Colts both faced opponents with 6-0 records or better for the second consecutive week in Week 9. Previously, only the 1934 Detroit Lions and 2004 Pittsburgh Steelers have played teams 6-0 or better in consecutive games.

The NFL teams to face opponents with 6-0 records or better in consecutive weeks:

The CAROLINA PANTHERS and CINCINNATI BENGALS are 8-0 for the first time in franchise history.

New Orleans quarterback DREW BREES, who threw three touchdowns in Week 9, extended his record streak to 51 consecutive games at home with at least one touchdown pass.

​The NFL Quarterbacks with the most consecutive home games with at least one touchdown pass:

Close games remain a staple of the 2015 season as nine of 13 games in Week 9 were decided by eight points or fewer. Through Week 9 of the NFL 2015 Regular Season, the average margin of victory is 10.28 points, which would be the lowest for a full season since at least 1970.

​The lowest average margin of victory since 1970:

Week 9 continued the trend of close games, as three games were decided in overtime. Fourteen games have gone to overtime this season, the second-most through Week 9 in NFL history.

The most overtime games through Week 9 in NFL history:

Williams also had two touchdowns against Miami, becoming the seventh player in NFL history to score a touchdown in each of his first five career games.

Mariota also became the second player in NFL history to pass for at least 350 yards with four touchdowns and no interceptions, including the game-winning touchdown pass in overtime (Minnesota's DAUNTE CULPEPPER, October 10, 2004 vs. Houston).

Philadelphia quarterback SAM BRADFORD completed 25 of 36 passes (69.4 percent) for 295 yards and threw a game-winning 41-yard touchdown to wide receiver JORDAN MATTHEWS in overtime to defeat the Dallas Cowboys 33-27 on Sunday Night Football. Bradford, who celebrated his 28th birthday on Sunday, became the first quarterback to start and win a regular-season overtime game on his birthday in NFL history.

St. Louis kicker GREG ZUERLEIN converted four field goals against Minnesota, including a 61-yarder in the second quarter. Zuerlein, who also kicked a 60-yard field goal in 2012, joined SEBASTIAN JANIKOWSKI as the only players with two 60-yard field goals in NFL history.

Carolina Panthers quarterback CAM NEWTON threw three touchdown passes and rushed for one TD in the Panthers' 37-29 win over Green Bay. The performance marked the 15th time in his career in which he threw multiple touchdown passes and rushed for a TD in a game. Newton joined Pro Football Hall of Famers STEVE YOUNG (17) and FRAN TARKENTON (16) as the only players in NFL history to have at least 15 such games.

Minnesota running back ADRIAN PETERSON rushed for 125 yards and a touchdown in the Vikings' 21-18 overtime win over St. Louis. Peterson has 28 career games with at least 125 rushing yards, the sixth most in NFL history. The only five players with more 125-yard rushing games are all in the Pro Football Hall of Fame: BARRY SANDERS (46), JIM BROWN (41), WALTER PAYTON (38), ERIC DICKERSON (36) and EMMITT SMITH (34).

Buffalo rookie running back KARLOS WILLIAMS rushed for 110 yards and two touchdowns in the Bills' 33-17 win against Miami. Williams is the seventh player in NFL history to score a touchdown in each of his first five career games.​