What To Look For Week 8 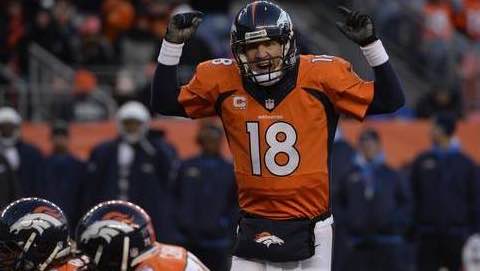 What To Look For Week 8

The 2015 International Series resumes in Week 8 with a matchup between the Detroit Lions and the Kansas City Chiefs at London's Wembley Stadium.

This is the third of three games to be played in London this season. In the first game on October 4, the New York Jets defeated the Miami Dolphins 27-14. Last week the Jacksonville Jaguars defeated the Buffalo Bills 34-31.

With a win on Sunday against Green Bay, Manning would tie BRETT FAVRE (186) for the most wins by a starting quarterback in NFL history.

The starting quarterbacks with the most career wins in NFL history:

Denver head coach GARY KUBIAK has led the Broncos to a 6-0 record in his first season with the team.

With a win against the Packers on Sunday Night Football, Kubiak would become the fourth head coach to lead his team to a 7-0 record in his first season with a new team since the AFL-NFL Merger.

The head coaches to lead their teams to a 7-0 record in their first season with a new team since 1970:

Roethlisberger would also become the ninth quarterback in NFL history to reach the mark with one team and the first to do so with the Steelers.

With 31 passing yards on Sunday, Roethlisberger would also reach 40,000 yards in his 163rd game, surpassing Pro Football Hall of Famer WARREN MOON (165 games) for the fifth fewest games to reach the milestone.

The quarterbacks to reach 40,000 career passing yards in the fewest games in NFL history:

Indianapolis quarterback ANDREW LUCK has 97 touchdown passes in 53 career games since entering the NFL in 2012.

With three touchdown passes against Carolina on Monday Night Football, Luck would reach 100 touchdown passes in his 54th career game and surpass PEYTON MANNING (56) and MATTHEW STAFFORD (55) as the fourth-fastest quarterback to reach the milestone.

The quarterbacks to reach 100 career touchdown passes in the fewest games in NFL history:

With the NFL's late-season schedule packed with division games, the mid-season slate features many exciting interconference matchups, including a Week 8 battle between quarterbacks ANDREW LUCK of the Indianapolis Colts and CAM NEWTON of the Carolina Panthers in primetime on Monday Night Football (ESPN, 8:30 PM ET). Luck (2012) and Newton (2011) were both first overall selections in consecutive NFL Drafts and led their teams to division titles last season.

Of the 14 games scheduled for Week 8, four will be interconference games.

A look at the Week 8 interconference games:

The NFL teams with the top five interconference records since realignment in 2002:

In Week 8, the Packers will travel to take on the Broncos on Sunday Night Football in a rematch of Super Bowl XXXII, won by the Broncos 31-24. The Broncos' Super Bowl XXXII team will be honored and owner PAT BOWLEN will be inducted into the club's Ring of Fame. Rematches are part of the NFL's On The Fifty platform, designed to link the past 49 Super Bowls with this year's game and honor the teams, players, coaches, fans and communities that have been a part of those games.

NFL Football: "What To Look For Week 8"