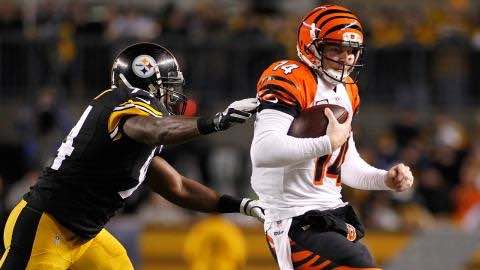 The Cincinnati Bengals have reached 6-0 for the third time in franchise history and first time since their 1988 AFC Championship season, when the team advanced to Super Bowl XXIII.

"We have a lot of good players maturing at the same time," says tackle ANDREW WHITWORTH. "There's still a long way to go, but I think that's showing."

As the 2015 NFL season approaches the midpoint, Cincinnati is one of five remaining undefeated NFL teams this season and can become the first Bengals team to reach 7-0 in the history of the franchise. Cincinnati is the only AFC North team to begin a season 6-0 since realignment in 2002.

The two previous seasons in which the Bengals started 6-0:

Coming off their bye in Week 7, the Bengals will take the short trip to Pittsburgh to face the Steelers in a crucial AFC North Division matchup.

Quarterback ANDY DALTON has played a pivotal role in the Bengals' undefeated start, displaying an ability to perform under pressure at home and on the road, regardless of the score.

In Week 3, he threw two go-ahead touchdown passes in the fourth quarter on the road in Baltimore, including the game-winning seven-yarder to wide receiver A.J. GREEN with 2:10 remaining to secure the 28-24 win and preserve the Bengals' undefeated record. In Week 5, he engineered a 17-point fourth-quarter comeback against the Seahawks that culminated in a 27-24 overtime win.

"Andy's always had that poise," says Cincinnati's MARVIN LEWIS of Dalton, who leads the NFL in passer rating (116.1) this season. "To me, that's what makes Andy Dalton tick. He hasn't changed, but the other guys have raised their level around him."

Since Dalton entered the NFL in 2011, the Bengals' have a 22-13 (.629) record on the road, the third-highest winning percentage in the NFL during that span.

Dalton (22) needs one more road win this season to tie Pro Football Hall of Famer DAN MARINO (23), BEN ROETHLISBERGER (23) and MATT RYAN (23) for the most road wins by a starting quarterback in his first five NFL seasons during the Super Bowl era. Cincinnati has five road games remaining on its schedule.

The Super Bowl-era starting quarterbacks with the most road wins in their first five seasons (since 1966):

The Bengals' offense, which is currently ranked third in the NFL with an average of 410.3 total net yards per game, has relied on its talented cast of runners and receivers.

Cincinnati is the only team in the AFC with two players who have scored at least six touchdowns apiece this season -- tight end TYLER EIFERT (six) and running back JEREMY HILL (six).

"I think our success comes from looking at the versatility we have," says Bengals wide receiver MARVIN JONES. "You can't have enough fingers to count the number of players who can change a game, and we expect greatness from all of them."

The Bengals and Steelers will meet in an important AFC North showdown at Heinz Field on Sunday afternoon.

Cincinnati, which had a bye in Week 7, is 6-0 for the third time in franchise history (1975, 1988). Since realignment in 2002, the Bengals are the first AFC North team to start a season 6-0. Cincinnati quarterback ANDY DALTON, who leads the league with a 116.1 passer rating, has 22 career wins on the road. With a victory at Pittsburgh, Dalton will tie Pro Football Hall of Famer DAN MARINO, Steelers quarterback BEN ROETHLISBERGER and MATT RYAN for the most road wins by a starting quarterback in his first five seasons during the Super Bowl era (since 1966).

"It's huge to be 6-0," says Dalton. "This is exactly where you want to be at this point. You want to win every game that you play so we just have to keep it going. We can't look back at what we've done, we have to keep doing exactly what we have been doing and keep pushing to be the best we can be."

Pittsburgh will look to rebound after last week's 23-13 loss at Kansas City. Running back LE' VEON BELL rushed for 121 yards for the Steelers while wide receiver ANTONIO BROWN had six catches for 124 yards. Brown recorded his 20th career 100-yard receiving game, joining HINES WARD (29) and Pro Football Hall of Famer JOHN STALLWORTH (25) as the only players in franchise history to accomplish the feat.

Against the Bengals, the Steelers will hope to get quarterback BEN ROETHLISBERGER back, who has missed the past four games with an injury.