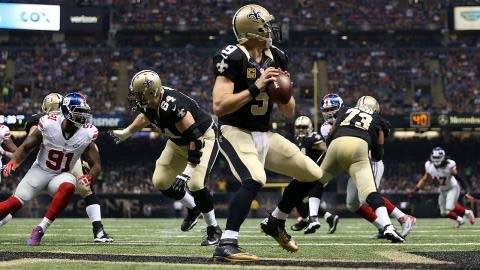 A look back at Week 8 of the 2015 NFL season including the Saints and Giants record-setting shoot out.

The New Orleans Saints and New York Giants combined for 13 touchdown passes and 101 points in the Saints' 52-49 win.

The 13 combined touchdown passes are the most in NFL history in a single game, surpassing the previous record of 12 on November 2, 1969 by the Saints (six) and Cardinals (six). The teams' combined total of 101 points tied for the third-highest single-game total ever and was the most since November 28, 2004, when the Bengals (58) and Browns (48) combined for 106 points.

New Orleans' Drew Brees (seven) tied the single-game NFL record for touchdown passes, while Eli Manning of the Giants posted a career-high six touchdowns. The performance marked Brees' 10th career game with at least five touchdown passes, as he eclipsed Peyton Manning (nine) for the most such games in NFL history.

The CINCINNATI BENGALS defeated Pittsburgh 16-10 and improved to 7-0 for the first time in franchise history.

Bengals quarterback ANDY DALTON passed for 231 yards and connected with wide receiver A.J. GREEN on a go-ahead nine-yard touchdown pass in the fourth quarter to give Cincinnati a lead it would not relinquish. Dalton earned his 23rd career road victory, tying Pro Football Hall of Famer DAN MARINO, BEN ROETHLISBERGER and MATT RYAN for the most road wins by a starting quarterback in his first five seasons during the Super Bowl era (since 1966).

Four NFL teams -- Carolina, Cincinnati, Denver and New England -- remain undefeated having started the season 7-0, the most in a single season in NFL history.

The games decided on a game-winning score as time expired in the fourth quarter in Week 8:

Roethlisberger also became the ninth quarterback in NFL history to reach the mark with one team and the first to do so with the Steelers.

Chiefs Prevail Across the Pond

The KANSAS CITY CHIEFS defeated the Detroit Lions 45-10 at London's Wembley Stadium in this season's third and final game of the NFL International Series in the United Kingdom.

The game also marked the first time in 54 years in which three different players (Smith, Thomas and West) scored a rushing touchdown in the first half for the club, when Pro Football Hall of Famer LEN DAWSON, ABNER HAYNES and CURTIS MC CLINTON accomplished the feat for the Dallas Texans on November 11, 1962.

Another INT for Charles Woodson

Oakland safety CHARLES WOODSON had one interception in the Raiders' 34-20 win against the New York Jets. Woodson now has 65 career interceptions, tying KEN RILEY for fifth on the all-time list.

St. Louis Rams rookie running back TODD GURLEY rushed for 133 yards including a 71-yard touchdown run in the Rams' 27-6 win against San Francisco. Gurley is the first rookie in NFL history to rush for at least 125 yards in four consecutive games.

Gurley's 566 rushing yards are the most through four starts by any NFL player that began his career in the Super Bowl era (since 1966).

Cardinals Offense Racking Up the Numbers

Arizona Cardinals quarterback CARSON PALMER passed for 374 yards and four touchdowns in the Cardinals' 34-20 win at Cleveland. Palmer has 20 touchdown passes in 2015, surpassing KURT WARNER (16 in 2008 and 2009) for the most ever by a Cardinals player through the first eight games of a season.

Cardinals running back CHRIS JOHNSON rushed for 109 yards against the Browns and is the first Cardinal with four 100-yard rushing games in a season since 1985 (STUMP MITCHELL, four).

Peyton Keeps Tacking on the Records

Peyton Manning completed 21 of 29 passes for 340 yards as the Broncos improved to 7-0 with their 29-10 victory over Green Bay on Sunday night.