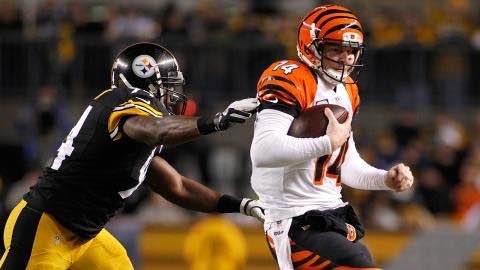 Two of those teams -- Green Bay and Denver -- will meet on Sunday night when the Packers travel to Sports Authority Field at Mile High to face the Broncos. It is only the fourth game in NFL history -- and the first in primetime -- between two teams 6-0 or better and the first since 2007 (November 4) when the 8-0 New England Patriots defeated the 7-0 Indianapolis Colts.

"We know what type of game we're in for," says Broncos head coach GARY KUBIAK about facing the Packers. "They're a great football team. We've got a big test coming up."

"We have a 6-0 football team and we have a chance to get a lot better," says Packers head coach MIKE MC CARTHY. "We're going to get ready for this second phase of our season."

"It was good to get us going back to doing what we do," says safety KAM CHANCELLOR of the 3-4 Seahawks, who defeated San Francisco 20-3 last week. "We're on the verge. We're headed in the right direction."

Among the highlights in Week 8 is the third 2015 International Series Game which will feature the Kansas City Chiefs and the Detroit Lions (FOX, 9:30 AM ET). It marks the first time NFL games will be played on consecutive Sundays at London's Wembley Stadium. Last week, the Jacksonville Jaguars outlasted the Buffalo Bills 34-31 in the UK as rookie running back T.J. YELDON rushed for 115 yards with a touchdown and quarterback BLAKE BORTLES threw the game-winning touchdown pass (31 yards) to wide receiver ALLEN HURNS with 2:16 remaining.

The Chiefs will play their first game in London and the team's first international game since a 1998 preseason contest against Green Bay in Tokyo, Japan.

"It is an honor for Kansas City to represent the NFL on an international stage," says Chiefs President MARK DONOVAN. "We are excited for the opportunity this creates for our fans, our city and the global growth of the Chiefs brand."

The Lions are traveling to London for the second consecutive year. Last season, Detroit knocked off Atlanta in a thrilling 22-21 come-from-behind victory.

"I really enjoyed the entire week," says Lions wide receiver GOLDEN TATE about last year's experience. "I can't say enough great things about everyone who welcomed us into the country. We're happy to be able to come out and try to expand our game."

Some of the other key games in Week 8:

The Bengals and Steelers will meet in an important AFC North showdown at Heinz Field on Sunday afternoon.

Cincinnati, which had a bye in Week 7, is 6-0 for the third time in franchise history (1975, 1988). Since realignment in 2002, the Bengals are the first AFC North team to start a season 6-0. Cincinnati quarterback ANDY DALTON, who leads the league with a 116.1 passer rating, has 22 career wins on the road. With a victory at Pittsburgh, Dalton will tie Pro Football Hall of Famer DAN MARINO, Steelers quarterback BEN ROETHLISBERGER and MATT RYAN for the most road wins by a starting quarterback in his first five seasons during the Super Bowl era (since 1966).

"It's huge to be 6-0," says Dalton. "This is exactly where you want to be at this point. You want to win every game that you play so we just have to keep it going. We can't look back at what we've done, we have to keep doing exactly what we have been doing and keep pushing to be the best we can be."

Pittsburgh will look to rebound after last week's 23-13 loss at Kansas City. Running back LE' VEON BELL rushed for 121 yards for the Steelers while wide receiver ANTONIO BROWN had six catches for 124 yards. Brown recorded his 20th career 100-yard receiving game, joining HINES WARD (29) and Pro Football Hall of Famer JOHN STALLWORTH (25) as the only players in franchise history to accomplish the feat.

Against the Bengals, the Steelers will hope to get quarterback BEN ROETHLISBERGER back, who has missed the past four games with an injury.

For the fourth time in NFL history, two teams 6-0 or better will meet. Both teams are coming off a bye and aiming to get to 7-0. In the Super Bowl era, 32 teams have started 7-0 and all 32 made the playoffs. Fifteen of those 32 advanced to the Super Bowl with nine of those clubs being crowned champions.

"We're 6-0 but there's room for improvement," says Packers quarterback AARON RODGERS, who leads the NFC with a 115.9 passer rating. "At this point, we don't need to win pretty every week. We'd like to. But they all count the same. We'll take them all."

Both teams have had offensive success in the past but this year, the defenses have played a vital role in their team's 6-0 start. The Packers lead the NFL allowing 16.8 points per game while the Broncos are tied for second at 17.0 points per game. The defenses have excelled in the red zone as Denver leads the league in opponent's scoring percentage (66.7 percent) and Green Bay ranks second (71.4). And rushing the passer has been key for each team as the Broncos lead the NFL with 26 sacks while the Packers are tied for second in the league with 23.

The game also features the only two quarterbacks in NFL history to average at least two touchdown passes per game. Rodgers (2.08; 241 touchdowns in 116 games) has the highest mark in league annals while Denver's PEYTON MANNING (2.05; 537 touchdowns in 262 games) ranks second.

It will be a key AFC East showdown on Thursday night as Week 8 kicks off with New England hosting Miami.

The Dolphins have won two consecutive games under head coach DAN CAMPBELL and the team's 82 points in those two contests are the most in a coach's first two NFL games in the past 25 seasons. Last week, Miami defeated Houston 44-26 as the Dolphins jumped out to a 41-0 lead at halftime. Quarterback RYAN TANNEHILL completed 18 of 19 passes (94.7 percent) for 282 yards with four touchdowns, no interceptions and a 158.3 passer rating -- the highest attainable mark -- and completed his first 18 passes of the game. Combined with his seven completions in a row to end the previous game, Tannehill set an NFL record with 25 consecutive completions (DONOVAN MC NABB, 24 in 2004).

"You look at our work out there and it really was a team effort," says Tannehill.

The Patriots improved to 6-0 with a 30-23 win over the New York Jets. Quarterback TOM BRADY (55,312) surpassed 55,000 career passing yards last week, becoming only the fifth quarterback in NFL history to accomplish the feat. Against the Jets, Brady passed for 355 yards with two touchdowns and no interceptions, his NFL-record 17th game with at least 350 passing yards, two passing touchdowns and no interceptions.

"I'm really proud of our team," says Patriots head coach BILL BELICHICK on the team's win over the Jets. "It's always good to come out on top. We've got a long way to go here. It's a short turnaround and we'll have to get ready in a hurry now for Miami."