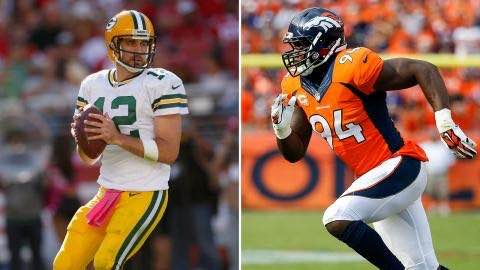 On Sunday night (NBC, 8:30 PM ET), a pair of 6-0 teams will meet when the Green Bay Packers face the Denver Broncos at Sports Authority Field at Mile High.

It is only the fourth game in NFL history -- and the first in primetime -- between two teams 6-0 or better.

In the Super Bowl era, 32 teams have started 7-0 and all 32 made the playoffs. Fifteen of those 32 advanced to the Super Bowl with nine of those clubs being crowned champions.

​The Packers are one of an NFL-record five 6-0 teams remaining, along with Carolina, Cincinnati, Denver and New England.

"We're 6-0," says Green Bay linebacker CLAY MATTHEWS. "It's only the second time in 50 years we've done that here. So it's a big accomplishment."

The Packers are coming off a bye in Week 7. Green Bay has won 15 of its past 19 games immediately following a bye week, including six in a row.

"We have a 6-0 football team and we have a chance to get a lot better," says Packers head coach MIKE MC CARTHY. "We're going to get ready for this second phase of our season."

McCarthy has posted an 8-1 (.889) record in games immediately after a bye, tied with Pro Football Hall of Famer MARV LEVY for the best record by a head coach (minimum eight games).

"We're 6-0 but there's room for improvement," says Packers quarterback AARON RODGERS. "At this point, we don't need to win pretty every week. We'd like to. But they all count the same. We'll take them all."

Rodgers leads the NFC with a 115.9 passer rating and is on pace to extend his NFL record streak of consecutive 100+ passer rating seasons to seven. The Packers have scored in the first quarter in 22 consecutive games, the longest streak in NFL history.

"I feel like we still have a lot more to give," says Green Bay guard T.J. LANG. "So to still be 6-0, it says a lot about the quality of this team."

"Our No. 1 emphasis is scoring defense," says Packers defensive coordinator DOM CAPERS. "That's where it all starts. It's a really good test for our red zone defense."

The Packers are tied for the NFC lead with 23 sacks and are tied for fifth in the conference with eight interceptions. Green Bay has recorded a sack in 42 consecutive games, the longest streak in franchise history and the longest active streak in the NFL.

"We've been playing fast," says Packers linebacker JULIUS PEPPERS, who leads the team with 5.5 sacks and is the only player in NFL history with at least 100 sacks (131) and 10 interceptions (11). "It's a good thing to have show up on tape."

Six different Packers have at least two sacks this season, led by Peppers (5.5) and Matthews (4.5). Six Packers have intercepted at least one pass this year, including two each by rookie QUINTEN ROLLINS and veteran SAM SHIELDS.

"The defense is off to a great start," says Green Bay running back EDDIE LACY. "They're playing at a real high level right now. From the looks of things, it's only going to get better."

With 10 games remaining, the Packers know there is still a lot of football to be played.

"It feels good to be 6-0," says Packers cornerback CASEY HAYWARD. "You never want to lose. We want to have the mentality that we can win every game."

For the fourth time in NFL history, two teams 6-0 or better will meet. Both teams are coming off a bye and aiming to get to 7-0. In the Super Bowl era, 32 teams have started 7-0 and all 32 made the playoffs. Fifteen of those 32 advanced to the Super Bowl with nine of those clubs being crowned champions.

"We're 6-0 but there's room for improvement," says Packers quarterback AARON RODGERS, who leads the NFC with a 115.9 passer rating. "At this point, we don't need to win pretty every week. We'd like to. But they all count the same. We'll take them all."

Both teams have had offensive success in the past but this year, the defenses have played a vital role in their team's 6-0 start. The Packers lead the NFL allowing 16.8 points per game while the Broncos are tied for second at 17.0 points per game. The defenses have excelled in the red zone as Denver leads the league in opponent's scoring percentage (66.7 percent) and Green Bay ranks second (71.4). And rushing the passer has been key for each team as the Broncos lead the NFL with 26 sacks while the Packers are tied for second in the league with 23.

The game also features the only two quarterbacks in NFL history to average at least two touchdown passes per game. Rodgers (2.08; 241 touchdowns in 116 games) has the highest mark in league annals while Denver's PEYTON MANNING (2.05; 537 touchdowns in 262 games) ranks second.