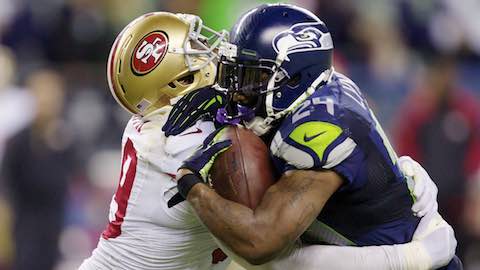 Seattle and San Francisco have split the previous 10 games, with each team claiming five wins apiece.

San Francisco quarterback COLIN KAEPERNICK passed for 340 yards and two touchdowns for a 128.2 passer rating in the victory. The 49ers veteran wide receiver duo of ANQUAN BOLDIN and TORREY SMITH served as reliable targets for Kaepernick on Sunday. Boldin had five receptions for 102 yards and Smith had three catches for 96 yards and a touchdown.

"Anything positive we can get, we have to keep it going right now and take it one game at a time," says Smith, who has recorded at least 90 receiving yards in three of his past four games on Thursday. "We can't spend too much time being happy about this. We have a tough defense coming in on Thursday. We have to get our minds right for that game."

"Unfortunately, we are challenged by this loss," says Seahawks head coach PETE CARROLL. "The important thing is now not what just happened but how we handle it. These guys will hang and work together to bring a really good effort on Thursday."

Seattle quarterback RUSSELL WILSON passed for 241 yards against Carolina, including a 40-yard touchdown pass to wide receiver RICARDO LOCKETTE in the third quarter. Seahawks tight end JIMMY GRAHAM added eight catches for 140 yards, the third-best total of his career (179 yards, NO at TB; 146 yards, NO vs. ATL).

"Fortunately we have a short week this week," says Wilson. "We get to play on Thursday night against a very tough football team. We'll go on the road. All we know to do is to pull the reigns together and go to battle together."

Wilson heads into this week's matchup having won his past three starts in Thursday games, passing for six touchdowns with no interceptions for a 117.2 passer rating. Including the postseason, Wilson has also led the Seahawks to victories in five of its past six games against San Francisco.