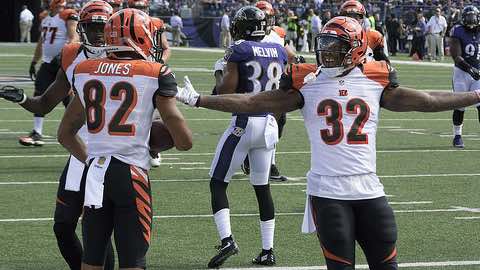 Close games are the norm in the NFL so making the most of your possessions is key. This is especially true when getting into the red zone.

This season, 47 games have been decided by seven points or fewer, tied for the second-most through the first six weeks of a season in NFL history. So the ability to score points -- especially inside your opponent's 20-yard line -- is what can separate wins and losses.

​"It's something we spent a ton of time on this offseason in OTA's, minicamp and training camp," says Arizona Cardinals quarterback CARSON PALMER on the team's red zone execution. "It's something that's a focal point of the offense. Being able to run the ball is key because it makes it a lot more difficult to defend down there."

While coming away with points on any red zone trip is important, teams emphasize the ability to score touchdowns.

"The four-point differential between a touchdown and a field goal is critical in the National Football League," says NFL Network analyst and former NFL fullback MICHAEL ROBINSON. "It's all about inches. The competition is that close."