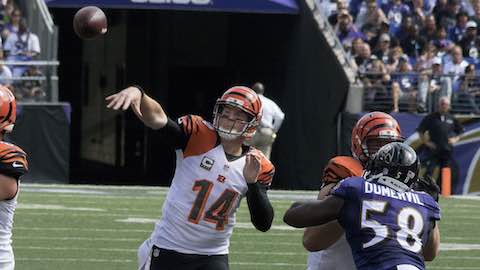 "We're 6-0 but there's room for improvement," says Packers quarterback AARON RODGERS, who leads the NFL with 15 touchdown passes. "At this point, we don't need to win pretty every week. We'd like to. But they all count the same. We'll take them all."

​Both the Falcons and Jets are led by new head coaches -- Atlanta's DAN QUINN and New York's TODD BOWLES -- and neither team made the postseason a year ago.

"Every win is a good win," says Bowles. "We've got to keep stacking chips. That's what we're going to do. Everything isn't going to be pretty. We're going to face adversity. It's how we respond to it that's going to make us a good team."

That's just another example of the unpredictability of the NFL. In fact, since the 12-team playoff format was adopted in 1990, at least four clubs made the playoffs each season that were not in the postseason the previous year.

For the teams with a winning record, nothing is guaranteed. And for those under .500, there's still time to turn things around.

"We've been through too much together," says Seahawks head coach PETE CARROLL, whose team has lost two in a row by a combined seven points. "We've got tremendous leadership, guys that really care, not just about the game of football, but about one another. With all of the history that we've had together, nothing is over. It's been hard but we have to see if our play can make it better."

Week 7 kicks off on Thursday night when the Seahawks visit the San Francisco 49ers at Levi's Stadium, the home of Super Bowl 50 (CBS/NFL Network, 8:25 PM ET), in an important NFC West showdown. Both teams enter the week two games out of first place in the division behind Arizona. The Seahawks, who look to play in their third consecutive Super Bowl, have won five of the past six meetings between the teams, including the 2013 NFC Championship Game. The 49ers are looking to build on last week's 25-20 win over Baltimore in which quarterback COLIN KAEPERNICK passed for 340 yards with a 128.2 passer rating and threw touchdown strikes to wide receivers QUINTON PATTON and TORREY SMITH.

The NFL also returns to London in Week 7 for the second of three 2015 International Series games at Wembley Stadium. The Buffalo Bills will face the Jacksonville Jaguars in a game (9:30 AM ET) that will be shown worldwide on a digital platform. The NFL and Yahoo! Inc. will deliver the first-ever live stream of an NFL game to a global audience across devices for free.

"The NFL has always been committed to being at the forefront of media innovation," says NFL Commissioner ROGER GOODELL. "Through this partnership with Yahoo! -- one of the world's most recognizable digital brands -- we are taking another important step in that direction as we continue to closely monitor the rapidly evolving digital media landscape."

Three teams -- Cincinnati, Denver And Green Bay -- have reached the 6-0 mark this season and each team has a bye in Week 7. Carolina (5-0) and New England (5-0) aim to join that list this week, as the Panthers host Philadelphia on Sunday Night Football and the Patriots face the New York Jets. The NFL record for the most 6-0 teams in a single season is four, which was set in 2009.

A look at the key games this weekend:

The Patriots will host the Jets on Sunday in a key AFC East matchup. New England enters the week in first place with a 5-0 record but New York sits just a game behind at 4-1. This marks the second-highest combined winning percentage (.900) in a Jets-Patriots game in Week 7 or later. On October 24, 2004 (Week 7), both teams were 5-0 (combined 10-0 record) leading into their matchup.

The Patriots are 5-0 for the first time since 2007 when the team went 16-0 during the regular season and advanced to the Super Bowl. Last week, New England won at Indianapolis, 34-27, in a rematch of last year's AFC Championship Game. Quarterback TOM BRADY passed for 312 yards, three touchdowns and a 104.8 passer rating in the victory. He has posted a 100+ passer rating in all five games and leads the NFL with a 118.4 mark.

The Jets have used the NFL's top rushing attack (146.0 yards per game) and the league's best defense (269.2 yards per game) to get off to a 4-1 start. New York defeated Washington 34-20 last week as running back CHRIS IVORY rushed for 146 yards with a touchdown and wide receiver BRANDON MARSHALL had seven catches for 111 yards with a score. Ivory leads the NFL averaging 115.0 rushing yards per game and Marshall is the first Jets player with four consecutive 100-yard receiving games in a season since Pro Football Hall of Famer DON MAYNARD in 1968.

"The further you go down the line into the season, the better you have to get," says Ivory. "You start playing teams that are constantly getting better and better. You're playing better opponents. But I think we're definitely getting better every week."

The Cowboys, who had a bye in Week 6, are looking to sweep the season series from the Giants. Dallas overcame a 10-point, fourth-quarter deficit on Kickoff Weekend as tight end JASON WITTEN had two touchdown catches -- including the game-winner with 0:07 remaining -- in the final 5:08 to defeat New York.

This week, veteran quarterback MATT CASSEL will make his first start for the Cowboys.

"He knows the offense and you can tell he's a veteran pro," says Dallas quarterbacks coach WADE WILSON about Cassel. "He has great command out there. The guys respond to him. He's a sharp guy and has picked things up very quickly."

The Giants enter Week 7 tied for first in the NFC East. New York had its three game winning streak stopped last week in a loss at Philadelphia. The Giants will look to bounce back this Sunday against another NFC East foe. One of the keys will be getting the ball to wide receiver ODELL BECKHAM JR. who has 10 touchdown catches in eight career division games.

"We have to overcome this loss and get ready for Dallas," says Giants quarterback ELI MANNING. "It's another game in the division. It's a big game at home. So we have to figure out a way to get a win."

The Eagles have won two in a row -- including last week's 27-7 win over the New York Giants on Monday night -- and have climbed into a first-place tie in the division. Philadelphia's defense limited the Giants to 247 total net yards, recorded three sacks and forced three turnovers, including NOLAN CARROLL's interception-return touchdown.

"Everyone knows what's at stake and we're just taking it one game at a time," says Eagles running back DE MARCO MURRAY, who rushed for 109 yards and a touchdown last week. "We have a long way to go but we know where we want to be at."

For the second time in franchise history, the Panthers are 5-0. Carolina also started 5-0 in 2003 and advanced to the Super Bowl.

Last week, the Panthers erased a 23-14 fourth-quarter deficit by scoring two touchdowns in the final 3:55. Quarterback CAM NEWTON threw the game-winning touchdown pass to tight end GREG OLSEN with 32 seconds remaining to give Carolina the victory. It marked the first game-winning touchdown pass in the final minute of a game when trailing against a team that played in the previous season's Super Bowl since Baltimore's JOE FLACCO connected with TORREY SMITH against Pittsburgh on November 6, 2011.

"This was one of the bigger victories that we have had since I have been here," says Panthers head coach RON RIVERA, who has guided the team to division titles in each of the past two seasons. "One of the things that stood out was the resiliency. One of the things that I told the guys on the sideline was to keep pounding. We have to continue to take care of our business and play these games one at a time."

In Week 7, the Saints will travel to take on the Colts Sunday in a rematch of Super Bowl XLIV, won by the Saints 31-17. Rematches are part of the NFL's On The Fifty platform, designed to link the past 49 Super Bowls with this year's game and honor the teams, players, coaches, fans and communities that have been a part of those games.

The 2015 International Series resumes in Week 7 with a matchup between the Jacksonville Jaguars and the Buffalo Bills at London's Wembley Stadium in the first-ever global live stream of an NFL game.

This is the second of three games to be played in London this season. In the first game on October 4, the New York Jets defeated the Miami Dolphins 27-14. The third game, which will also be played at Wembley, features the Kansas City Chiefs against the Detroit Lions in Week 8 (November 1st).