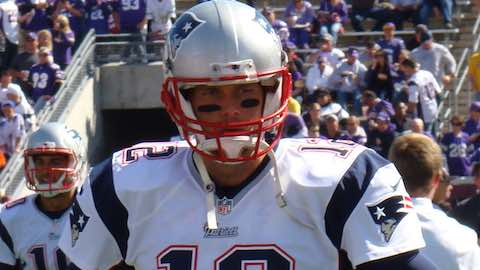 In the NFL, all 16 games on the schedule are critical. But those six division games take on added significance.

"It's going to turn around pretty quick with these Jets," said Patriots head coach BILL BELICHICK after the Patriots' 34-27 win at Indianapolis on Sunday night. "We're playing for first place this week, so we need everybody ready to go."

The NFL's Week 7 schedule, which features five division games, kicks off with an NFC West battle between the Seattle Seahawks and San Francisco 49ers on Thursday Night Football.

"I think the significance of your divisional games is well-known and well-stated," says Giants head coach TOM COUGHLIN, whose team will host NFC East rival Dallas this Sunday. "I think the excitement of playing within the division is always there."

The undefeated New England Patriots (5-0) will host the New York Jets (4-1) at 1:00 PM on Sunday afternoon in a crucial AFC East contest. The two club's combined winning percentage of .900 is the second-highest heading into a game featuring these two teams this late in the season. In 2004, both teams were undefeated coming into their Week 7 meeting in New England, which the Patriots won by a score of 13-7 en route to a 14-2 record and Super Bowl XXXIX title.

"You've got to win divisional games to get into the playoffs," says Jets wide receiver ERIC DECKER. "Everyone knows New England's the champions. They're undefeated right now. They've played good football. It's going to be a challenge for us."

​No team has proven more adept at winning division games in recent years than New England, which has an NFL-best 25-6 (.806) record in division games over the past five seasons.

The teams with the best division records over the past five seasons (since 2010):

The Patriots' sustained run of success in and out of the division begins with the head coach-quarterback combination of Belichick and TOM BRADY. Brady has won more division titles than any other starting quarterback in NFL history (12), and Belichick's .669 career winning percentage against division opponent ranks fourth among NFL head coaches since the 1970 AFL-NFL merger (minimum 60 games). Belichick's 85 division wins rank fifth during that span, and he leads active head coaches in both categories.

The head coaches with the highest winning percentage against division opponents since 1970 (minimum 60 games):

Note: Ties prior to 1972 not included in winning percentage.

The head coaches with the most wins against division opponents since 1970:

For the Jets and Patriots, this week's game is critical to obtaining an early edge in the AFC East, but can also help build confidence for the rematch to follow on December 27. The clubs will meet again in Week 16 in New York, and the division title may very well be on the line.

"You know ultimately at the end of the day, coming down the stretch you're going to have to beat those teams in your division," says NFL Network analyst and former NFL MVP quarterback KURT WARNER. "To go in and beat them early, gain that confidence, get a lead on them, becomes so important. At the end of the day, you just have to win your division. Anytime you can gain that confidence or that edge over those teams, especially early in the season, it's huge."

The Patriots will host the Jets on Sunday in a key AFC East matchup. New England enters the week in first place with a 5-0 record but New York sits just a game behind at 4-1. This marks the second-highest combined winning percentage (.900) in a Jets-Patriots game in Week 7 or later. On October 24, 2004 (Week 7), both teams were 5-0 (combined 10-0 record) leading into their matchup.

The Patriots are 5-0 for the first time since 2007 when the team went 16-0 during the regular season and advanced to the Super Bowl. Last week, New England won at Indianapolis, 34-27, in a rematch of last year's AFC Championship Game. Quarterback TOM BRADY passed for 312 yards, three touchdowns and a 104.8 passer rating in the victory. He has posted a 100+ passer rating in all five games and leads the NFL with a 118.4 mark.

The Jets have used the NFL's top rushing attack (146.0 yards per game) and the league's best defense (269.2 yards per game) to get off to a 4-1 start. New York defeated Washington 34-20 last week as running back CHRIS IVORY rushed for 146 yards with a touchdown and wide receiver BRANDON MARSHALL had seven catches for 111 yards with a score. Ivory leads the NFL averaging 115.0 rushing yards per game and Marshall is the first Jets player with four consecutive 100-yard receiving games in a season since Pro Football Hall of Famer DON MAYNARD in 1968.

"The further you go down the line into the season, the better you have to get," says Ivory. "You start playing teams that are constantly getting better and better. You're playing better opponents. But I think we're definitely getting better every week."

The Cowboys, who had a bye in Week 6, are looking to sweep the season series from the Giants. Dallas overcame a 10-point, fourth-quarter deficit on Kickoff Weekend as tight end JASON WITTEN had two touchdown catches -- including the game-winner with 0:07 remaining -- in the final 5:08 to defeat New York.

This week, veteran quarterback MATT CASSEL will make his first start for the Cowboys.

"He knows the offense and you can tell he's a veteran pro," says Dallas quarterbacks coach WADE WILSON about Cassel. "He has great command out there. The guys respond to him. He's a sharp guy and has picked things up very quickly."

The Giants enter Week 7 tied for first in the NFC East. New York had its three game winning streak stopped last week in a loss at Philadelphia. The Giants will look to bounce back this Sunday against another NFC East foe. One of the keys will be getting the ball to wide receiver ODELL BECKHAM JR. who has 10 touchdown catches in eight career division games.

"We have to overcome this loss and get ready for Dallas," says Giants quarterback ELI MANNING. "It's another game in the division. It's a big game at home. So we have to figure out a way to get a win."