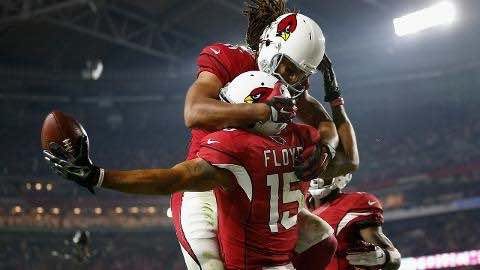 With three weeks remaining in the regular season, the suspense continues to build as teams make their final playoff push.

"It's the pretenders in the beginning of the season and at the end of the season, it's always the contenders," says Seattle defensive end MICHAEL BENNETT, whose team has won four in a row. "The great teams play great football in December."

With three games to go, there are 17 teams either in or within one game of a playoff spot.

"Every win is huge," says Philadelphia safety MALCOLM JENKINS, whose team is tied for first in the NFC East. "To put two wins in a row together, at this time of year, in December, it's important. We are trying to separate ourselves. We are jockeying for position. Every win matters."

As we approach the final three weeks of the regular season, there are still nine playoff berths up for grabs. Three teams have clinched a spot in the postseason: the Carolina Panthers (NFC South and first-round bye), New England Patriots (AFC East) and Arizona Cardinals (playoff spot).

The Panthers, who are 13-0 for the first time in franchise history and have won 17 consecutive regular-season games, secured a first-round bye last week with a 38-0 win over Atlanta. Carolina will travel north to face the New York Giants -- who are tied for first in the NFC East -- this Sunday (1:00 PM ET, FOX) in a matchup that has postseason implications for both clubs.

"Each game is significant as we go forward," says Carolina head coach RON RIVERA. "We're going to play next week obviously to win the football game and see whatever happens. We have to take each week as it comes. That's the only way we can do it. I can't predict what next week's game is going to mean and the week after that. Right now, we are guaranteed a home playoff game -- at least one -- and a bye."

Week 15 begins on Thursday night when the Tampa Bay Buccaneers visit the St. Louis Rams (8:25 PM ET, NFL Network) in a matchup featuring two of the league's best rookies. Tampa Bay quarterback JAMEIS WINSTON has set the team rookie record with 3,059 passing yards and St. Louis running back TODD GURLEY has five games with at least 125 rushing yards, trailing only Pro Football Hall of Famer ERIC DICKERSON (seven in 1983) for the most ever by a rookie.

The week continues with Saturday night football (8:25 PM ET, NFL Network) when the Dallas Cowboys host the New York Jets. The game features three of the most prolific touchdown receivers since 2012 -- Dallas' DEZ BRYANT ranks first (43) over that span, followed by the Jets' BRANDON MARSHALL (second with 42) and ERIC DECKER (tied for third with 38). Marshall and Decker have both recorded a touchdown catch in seven games this season, tied for the most by teammates in a season in NFL history (1998 Minnesota: Pro Football Hall of Famer CRIS CARTER and RANDY MOSS).

Some of the other key games this week:

The Texans and Colts meet in Week 15 with first place on the line in an important AFC South showdown. Both clubs enter the game tied for first place in the division.

"It's right there in front of us," says Houston quarterback T.J. YATES. "We can't control what happens after that. All we can do is worry about Indianapolis and go up there and get a win."

The teams met earlier in the season with the Colts defeating the Texans 27-20 in Houston. In that contest, Indianapolis quarterback MATT HASSELBECK threw two touchdown passes to former Texans wide receiver ANDRE JOHNSON and Colts running back FRANK GORE rushed for 98 yards and a score.

"This is a must-win situation coming up this week," says Colts wide receiver T.Y. HILTON, who has 749 receiving yards (107 per game) and six touchdowns in seven career games against Houston. "We've got to win it. Got to have it."

"It's definitely a springboard for us," says Lacy, who has three 100-yard rushing performances in the past four games. "We have three games left and we've got to finish these games out."

The Raiders remain in the hunt for a playoff spot and knocked off the division-leading Broncos last week 15-12 in Denver. Oakland quarterback DEREK CARR threw two touchdown passes in the victory and linebacker KHALIL MACK was a force on defense, notching five sacks, seven tackles and a forced fumble. Mack tied the franchise single-game record with five sacks, equaling the mark set by Pro Football Hall of Famer HOWIE LONG (October 2, 1983).

"We're doing some good stuff on offense and we've been getting wins," says Roethlisberger. "Offensively, we want to score touchdowns. We get disappointed when we don't put points on the board."

The Cardinals have won seven in a row and have posted back-to-back 11-win seasons for the first time in franchise history. Arizona clinched a playoff berth with a dramatic 23-20 win over Minnesota last Thursday night.

"We have bigger goals," says Cardinals quarterback CARSON PALMER, who has set the single-season team record with 31 touchdown passes and is the only player in club history with two 4,000-yard seasons.

At 11-2, Arizona is closing in on the division title and a first-round bye.

"You want to have momentum going into January," says Cardinals linebacker DWIGHT FREENEY, who sealed the team's Week 14 victory with a sack and forced fumble on Minnesota's final offensive play. "We are still fighting to lock down that one or two seed. We have to take every game seriously and treat it like it's a playoff game."

The Eagles have won two in a row and are tied for first place in the NFC East with three games left to play. Last week, Philadelphia defeated Buffalo 23-20 and got touchdowns from running back DARREN SPROLES and rookie wide receiver NELSON AGHOLOR.

"Our team is playing together and we're playing better in all three phases," says Eagles head coach CHIP KELLY. "There are still a lot of things to correct but we're 2-0 in December against two good opponents. But now we've got to get ready because we've got a really good Arizona team coming in here on Sunday."