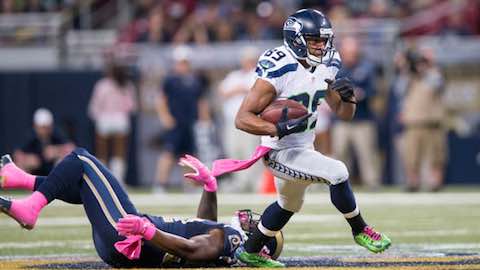 Doug Baldwin always bristled at the suggestion that Seattle's receivers are 'pedestrian.' Over the past two weeks, Baldwin and the Seahawks offense has done something about it.

WR Doug Baldwin has spent much of his time in Seattle in high dudgeon over the almost-universal characterization of Seattle’s receivers as “pedestrian.” Never mind that for most of Baldwin’s tenure, the Seahawks have been a successful run-oriented team that has employed a collection of undrafted free agents, including Stanford grad Baldwin, as targets for QB Russell Wilson. He still wants the ball more than he gets it.

Baldwin said more than once that, if provided the chance, he could be a Pro Bowl receiver, a fact that is increasingly difficult to dispute after the performances he has logged the past two weeks.

Heading into Week 12 against Pittsburgh, Baldwin still averaged only 4.4 catches, 53.9 yards and not even a touchdown per game (0.3), numbers that keep him a fair distance from the Pro Bowl. But he had six catches on six targets for 145 yards and three TDs against the Steelers and, last Sunday, five catches on seven targets for 94 yards and two more TDs at Minnesota.

“I think we're getting him in the right spots to take advantage of the plays he can make,” said coach Pete Carroll. “He's always been a playmaker, yet we’ve been able to take advantage of the things that both guys (Baldwin and QB Russell Wilson) see more effectively. And he's at his best. I know as he matures as a pro, he's as clear as he's ever been about what it takes and what he's after, and how he wants to go about it.”

Baldwin is the first Seattle receiver to catch two or more TDs in consecutive games since Darrell Jackson Nov. 23 and Nov. 30, 2003 against Baltimore and Cleveland, respectively. In Seahawks annals, this is a most unusual feat.

Elected to the Pro Football Hall of Fame in 1995, Steve Largent caught 100 touchdown passes in 200 games for Seattle between 1976-89. Hard as it may be to believe given his status as a franchise icon, only once did Largent catch two in back-to-back games. The list of Seahawks' receivers who accomplished that feat:

Baldwin's sudden productivity — his five TDs are the most by a receiver over two games in franchise history — corresponds to the most dramatic upsurge of Wilson's career. In Seattle's first nine games, Wilson threw 10 touchdowns, seven interceptions and had no rushing touchdowns as the Seahawks went 4-5, nearly playing themselves out of the postseason with a string of fourth-quarter gags.

But his past three games, Wilson has 879 yards, 11 touchdowns and no interceptions while completing 76.7 percent of his passes. Wilson leads the NFL in completion percentage at 68.5 percent. If that holds, Wilson will join Dave Krieg (1991) as the only Seattle quarterbacks to lead the NFL in that category.

Perhaps the most stunning stat of all: In his three-game rampage, Wilson has completed 59 of 69 passes from the pocket (maybe the bigger story is that Seattle’ offensive line has formed 69 pockets), with 10 touchdowns and no picks. In other words, Wilson has as many TDs from the pocket as he has incompletions. That’s like Nelson Cruz hitting as many home runs as he records outs.

This runs counter to the improvised scramble plays that have characterized the first three-plus years of Wilson's career. The proficiency in the air has placed him in some rare company -- quarterbacks with three consecutive passer ratings north of 130.0.

These quarterbacks posted the highest combined passer rating over any three-game (or more) span since 1960 (minimum 50 pass attempts):

Think of the quarterbacks not on this list — Tom Brady, Peyton Manning, Joe Montana, Brett Favre, to cite four.

Since Wilson entered the league in 2012, it has been accepted that Seattle's offense runs through RB Marshawn Lynch. With the emergence of Thomas Rawls and the 29-year-old Lynch's tenure with the Seahawks on the brink, that is no longer the case. Wilson has demonstrated emphatically that he can be an elite quarterback without Lynch. A month ago, not many believed that.