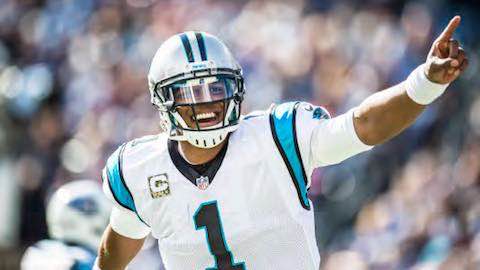 It's Week 14 of the NFL season and only four games remain to decide who advances to the playoffs for a shot at a trip to Super Bowl 50. ​

"Hopefully you just try to build off the last game into the next one," says New York Jets quarterback RYAN FITZPATRICK, who passed for 390 yards and two touchdowns in the team's 23-20 overtime win over the Giants in Week 13. "We've got to try to capture this momentum and ride it into next week and just continue to play better as a team."

With four games to go, there are 20 teams either in or within one game of a playoff spot.

"We're on a good stretch," says Seattle quarterback RUSSELL WILSON whose Seahawks have won three in a row and five of their past six. "But the only thing that matters is next week. That's just our focus. That's always been our focus, which is to go 1-0."

As we approach the final four weeks of the regular season, only one team -- the Carolina Panthers -- has clinched a spot in the 2015 playoff field. The Panthers, who are 12-0 for the first time in franchise history and have won 16 consecutive regular-season games, secured the NFC South division title last week.

"We've got a good group of young men in our locker room," says Panthers head coach RON RIVERA. "We have a good group of coaches and great support from our football staff and ownership. But we still have a lot of work left to go. We have four more games in the regular season to play."

Entering the final four weeks of the regular season, a lot is still to be decided. Some of the key games in Week 14:

The Vikings have won six of their past eight games and enter the final quarter of the season at 8-4, tied with Green Bay atop the NFC North. Minnesota running back ADRIAN PETERSON leads the league with 1,182 rushing yards and has five games this season with at least 125 rushing yards. Peterson has 30 career games with at least 125 rushing yards and the only players with more are all enshrined in the Pro Football Hall of Fame: BARRY SANDERS (46), JIM BROWN (41), WALTER PAYTON (38), ERIC DICKERSON (36) and EMMITT SMITH (34).

The Cardinals have won six in a row and lead the NFC West with a 10-2 record. Arizona quarterback CARSON PALMER leads the NFL with a touchdown pass every 14.4 attempts. He has 29 touchdown passes and needs two to pass KURT WARNER (30 in 2008) for the most in a season in franchise history. In last week's win at St. Louis, Cardinals wide receiver LARRY FITZGERALD had eight catches and became the youngest player in NFL history to reach 1,000 career receptions (32 years, 97 days).

"We control our own destiny so we just have to continue winning," says Fitzgerald about Arizona's playoff outlook. "We just have to keep doing what we need to do. It's going to be a challenge but we understand what we have in front of us."

The Falcons, who are looking to end a five-game skid, still find themselves in the thick of the NFC playoff picture with four games left in the regular season. Atlanta wide receiver JULIO JONES leads the NFL with 102 receptions and 1,338 receiving yards. Jones is only the second player in NFL history (MARVIN HARRISON, 2002) to have at least 100 receptions in his team's first 12 games.

The Panthers have clinched the NFC South for the third consecutive season. With four games remaining, Carolina is looking to clinch the No. 1 seed in the NFC and maintain its perfect season. Panthers quarterback CAM NEWTON threw five touchdown passes in last week's 41-38 win at New Orleans, his second five-touchdown performance in the past three weeks. In his career, Newton has posted a 15-4 (.789) record as a starting quarterback in regular-season games played in December/January.

The Steelers have won three of their past four and are averaging 529 total net yards per game during that span. Pittsburgh has gained at least 450 yards in each of its past four games, tied for the longest such streak in NFL history. In his past three games, Steelers quarterback BEN ROETHLISBERGER has passed for 1,199 yards (399.7 per game) and eight touchdowns.

"We're just taking it one week at a time," says Pittsburgh wide receiver ANTONIO BROWN, who leads the AFC in receptions (93) and receiving yards (1,310). "I'm looking forward to playing Cincinnati and our games in the next four weeks."

Cincinnati leads the AFC North with a 10-2 record and is currently tied with Denver and New England for the best record in the conference. Bengals quarterback ANDY DALTON, who had a career-best 146.8 passer rating in last week's win at Cleveland, has 3,191 passing yards this season and joined PEYTON MANNING as the only players in NFL history with at least 3,000 passing yards in each of their first five NFL seasons.

"It's always one game at a time," says Dalton, "but we understand the Steelers are our next game. We just have to have a good week of preparation and put ourselves in a good position to play well on Sunday."

Buffalo quarterback TYROD TAYLOR threw three touchdown passes without an interception for the second consecutive week as the Bills knocked off Houston 30-21 to improve to 6-6 and keep themselves in the AFC playoff picture. Taylor and wide receiver SAMMY WATKINS connected three times for 109 yards and a touchdown last week and Watkins has nine catches for 267 yards (133.5 per game) and three touchdowns in the team's past two games.

"We take each week as an individual season," says Eagles head coach CHIP KELLY. "Our total focus and concentration is now just on Buffalo. We'll highlight what we did well but we also have a lot of mistakes we have to continue to correct. That's part of what the weekly process is about. Our focus is on the Bills right now."

Both the Patriots and Texans are looking to bounce back after losing in Week 13. But the clubs still enter the final stretch of the season in control of their division.

At 10-2, New England sits atop the AFC East and is tied with Cincinnati and Denver for the best record in the conference. Patriots quarterback TOM BRADY leads the league in passing yards (3,912) and touchdown passes (31). He is closing in on his eighth career 4,000-yard season and fifth in a row.

"We've got an important game coming up and we've got to just play better football," says Brady. "That's what it comes down to. Each of these games is important. We're in a decent spot. If you want to win consistently, you've got to do things well consistently. And we just haven't been playing winning football the last two weeks."

Houston defensive end J.J. WATT leads the NFL with 13.5 sacks, including 9.5 sacks in his past six games. In just his fifth season, Watt has totaled 70.5 career sacks. Offensively, Texans wide receiver DE ANDRE HOPKINS ranks second in the AFC in both receptions (86) and receiving yards (1,169).

"It's all still right in front of us," says Houston linebacker BRIAN CUSHING. "We control our own destiny right now. We just have to worry about the next game. The most important thing is to get the job done and win."