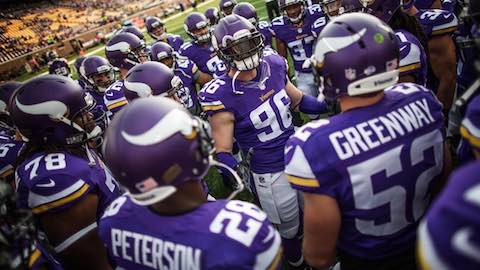 As the calendar turns to December, the NFL playoff picture is starting to take shape. With five games remaining in the regular season, there are currently 21 teams either in or within one game of a playoff spot.

"These next five games are very important," says Arizona Cardinals cornerback PATRICK PETERSON. "We want to make sure our guys are ready for this run of the season."

The Carolina Panthers own the NFL's best record at 11-0. Carolina, who travels to New Orleans this week (FOX, 4:25 PM ET), has won 15 consecutive regular-season games and the team's 11-0 start is the first in franchise history.

​"There's going to be a lot of talk and speculation about it," says Panthers head coach RON RIVERA on the possibility of a 16-0 regular season. "But the truth of the matter is that it should only be geared to the next game. I know this much: the next possibility is 12. We'll continue to take that one-game-at-a-time mentality. We can't get ahead of ourselves. We can't look at what the possibilities are other than what's in front of us. That's what the mantra is going to continue to be."

Some of the other key contests in Week 13:

The two-time defending NFC champion Seahawks have won two games in a row and have climbed right back into the playoff picture. In last week's 39-30 victory over Pittsburgh, Seattle quarterback RUSSELL WILSON threw a career-high five touchdown passes -- three to wide receiver DOUG BALDWIN and two to wide receiver JERMAINE KEARSE. Wilson, who turned 27 years old on Sunday, is only the second player since 1950 to throw at least five touchdown passes on his birthday (Pro Football Hall of Famer WARREN MOON, 1990).

The Vikings have won six of their past seven games and lead the NFC North by a game over Green Bay. Last week at Atlanta, running back ADRIAN PETERSON rushed for 158 yards and two touchdowns in Minnesota's 20-10 victory. The performance marked Peterson's 18th career game with at least 150 rushing yards, tied with Pro Football Hall of Famers ERIC DICKERSON and EMMITT SMITH for the fourth-most all-time. Only Hall of Famers BARRY SANDERS (25), JIM BROWN (22) and WALTER PAYTON (20) have more 150-yard rushing games.

"We have a big couple of weeks ahead of us," says Vikings linebacker ANTHONY BARR, who had eight tackles, a sack and two forced fumbles last week. "Hopefully we can continue to play well and keep it going."

The Chiefs and Raiders are both in the AFC playoff mix with five games remaining in the regular season.

Kansas City has won five in a row, including last week's 30-22 win over Buffalo. Chiefs quarterback ALEX SMITH completed 19 of 30 passes (63.3 percent) for 255 yards with two touchdowns and no interceptions for a 112.5 passer rating against the Bills. He now has an active streak of 283 consecutive passes without an interception, the fourth-longest streak in NFL history.

"We fight together, we're a family," says Chiefs linebacker TAMBA HALI, who had a sack and a forced fumble against Buffalo. "We pride ourselves on calling each other family. When our guys go down, the next guys have to be ready to step up and those guys did a tremendous job."

Oakland quarterback DEREK CARR passed for 330 yards with three touchdowns and no interceptions for a 120.3 passer rating in the Raiders' 24-21 win at Tennessee in Week 12. First-year wide receiver SETH ROBERTS had six catches for 113 yards and two touchdowns while rookie wide receiver AMARI COOPER had seven catches for 115 yards, becoming the first Raiders rookie with four 100-yard receiving games.

Denver sits atop the AFC West with a 9-2 record after handing New England its first loss last week with a 30-24 overtime victory on Sunday night. The Broncos have won two in a row, the first two starts of quarterback BROCK OSWEILER's career. Osweiler threw a go-ahead touchdown to ANDRE CALDWELL with 1:09 remaining in the fourth quarter last week. In the win over the Patriots, running back C.J. ANDERSON rushed for 113 yards and two touchdowns, including the game-winning 48-yard touchdown in overtime, the longest overtime touchdown run in team history.

"Brock has done a great job," says Broncos head coach GARY KUBIAK about his young quarterback, "but he'd be the first one to tell you it's always about the team."

Chargers quarterback PHILIP RIVERS passed for 300 yards and four touchdowns in last week's 31-25 win at Jacksonville. Rivers, who has 40,166 career passing yards, reached 40,000 yards in his 159th game, the fourth-fastest in NFL history. Tight end ANTONIO GATES had two touchdown receptions against the Jaguars and now has 21 career games with multiple touchdown catches, the most ever by a tight end.

The Colts have won three in a row and are tied with Houston for first place in the AFC South. At 6-5, Indianapolis is right in the middle of the playoff picture. Veteran quarterback MATT HASSELBECK threw for 315 yards and two touchdowns in last week's 25-12 win over Tampa Bay and is now 4-0 as the team's starter this season. He is one of only three quarterbacks to win four consecutive starts after turning 40 years old, joining BRETT FAVRE and Pro Football Hall of Famer WARREN MOON.

"It's basically one game at a time," says Colts head coach CHUCK PAGANO about the team's mentality. "We're just going to prepare and work extremely hard day-in and day-out and then play as well as we can to try and keep this thing going."

Pittsburgh is 6-5 and battling for an AFC playoff spot. In the team's Week 12 loss at Seattle, wide receiver MARKUS WHEATON had nine catches for 201 yards and a touchdown. Wheaton, ANTONIO BROWN and MARTAVIS BRYANT have each had a 175-yard receiving day this season and the Steelers are the first team in NFL history to have three different players record a 175-yard receiving game in the same season.

The Cowboys and Redskins will meet on Monday night in a key NFC East matchup. All four NFC East teams are separated by just two games. Washington and the New York Giants enter Week 13 tied for first place but Philadelphia (one game behind) and Dallas (two games behind) remain in the hunt.

Cowboys wide receiver DEZ BRYANT has four touchdowns in the past three meetings between the two teams. Bryant, who aims for his third consecutive Monday Night Football game with a touchdown, leads the NFL with 43 touchdown receptions since 2012.

The Redskins have won five in a row at home and quarterback KIRK COUSINS has completed 127 of 167 passes (76 percent) for 1,436 yards with 10 touchdowns and no interceptions for a 121.2 passer rating in those five. Cousins has also rushed for three touchdowns during that span. Last week, he threw a 63-yard touchdown pass to wide receiver DE SEAN JACKSON, who recorded his 19th career touchdown of at least 60 yards, tied with Pro Football Hall of Famer LANCE ALWORTH for the fourth-most in NFL history.

"We're just trying to catch this wave," says Jackson. "If we catch a wave and keep our fire, playoffs here we come."

The Packers enter December one game behind Minnesota in the NFC North. Green Bay quarterback AARON RODGERS has won 10 of 13 career starts against the Lions with a 106.8 passer rating. Packers running back EDDIE LACY has rushed for at least 100 yards in each of the past two games and had a 25-yard touchdown reception in last week's game against Chicago.

Detroit has won three games in a row, including a Week 10 win at Green Bay. Last week, in the Lions' 45-14 victory over Philadelphia, quarterback MATTHEW STAFFORD passed for 337 yards and five touchdowns while wide receiver CALVIN JOHNSON had three touchdown receptions. Johnson, who has 14 touchdowns in 15 career meetings against Green Bay, has a touchdown catch in seven consecutive Thursday games.

"Our guys have been battling and getting better every week and that's what we have to do again this week," says Lions head coach JIM CALDWELL. "We have to find a way to get better because we have a big challenge ahead of us on Thursday."