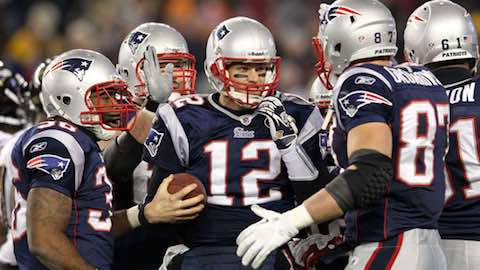 The New England Patriots have reached 10-0 for the second time in franchise history and first time since 2007, when they finished the regular season undefeated and advanced to Super Bowl XLII.

"It feels good to win," said quarterback TOM BRADY after the Patriots' 20-13 win against the Bills on Monday Night Football. "It's obviously hard to get to this point (10-0). So, we'll just keep fighting."

This weekend, New England can clinch its seventh consecutive division title, which would tie the 1973-79 Los Angeles Rams for the longest streak in NFL history. The Patriots will travel to Denver to face the Broncos in a battle of first-place teams in primetime on Sunday Night Football (8:30 PM ET, NBC).

The Patriots, who also won five consecutive division titles from 2003-2007, are the only team in NFL history to win 11 division championships in a 12-year span.

The NFL teams with the most consecutive division titles:

Since the NFL instituted the 16-game schedule in 1978, five teams have clinched a division a title after 11 games. Four of those five teams advanced to the Super Bowl, including the 1985 Chicago Bears, who finished the season 15-1 en route to a Super Bowl XX victory.

The teams to clinch a division title after 11 games since 1978:

Dating back to the 2014 postseason, the Patriots have won 13 consecutive games, the third-longest winning streak in franchise annals.